There is nowhere I’d rather wait out coronavirus than Uganda 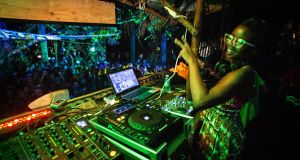 Last September, I spent four days on the banks of the river Nile in eastern Uganda. All day and night there was music, from traditional instruments fused with electro to thumping percussion bands to an unforgettable early morning death metal DJ set.

The crowds were wearing neon paint, glitter and pumping with excitement. “Party after party,” they shouted, a mantra coined from a 2019 hit by Ugandan rapper BigTril.

Nyege Nyege is east Africa’s biggest festival, gathering thousands of music fans from across the world. Its Lugandan name translates as “the uncontrollable urge to dance”.

For the past year I’ve been based in Uganda, and Nyege Nyege is just one entry on a long list of everything I love about this country. There are the boda boda motorcycles that speed along, wind rushing in your hair as you bypass cow-herders in the countryside or beeping cars in the endless city “jam”.

There’s the diversity in the capital, Kampala, where you can sample any cuisine, from Japanese sushi to a grasshopper rolex, a speciality made from chapati, eggs and insects.

There are the landscapes, which range from tropical modernist architecture, to groves of banana trees, chimp-filled rainforests and snow-capped mountains; the onset of thundering storms, when the sky darkens in anger; and vibrant sunsets glowing purple, pink, orange – colours as striking as the kitenge fabrics sold by the yard in Uganda’s bustling markets.

For the first few months, I lived on a hilltop overlooking Lake Victoria. Nearby, families of monkeys would leap around trees, hanging low and taunting our dog, who bounded forth each morning with the unwavering misguided optimism that he could catch them. On Sundays, the singing of choirs rose from churches below.

In the neighbourhood was a cultural centre, a pizzeria, and a resort with a massive pool. At the weekends, the resort grounds were full of Ugandan wedding parties having professional photographs taken. Dozens of brides posed in magnificent white dresses, surrounded by bridesmaids and groomsmen who joked and jostled with beaming new husbands.

Some evenings, we’d leave the suburbs. Bars stay open all night in Kabalagala, a section of Kampala people jokingly call “Uganda’s Las Vegas”. You can buy a meal at 4am, play pool or sit on a balcony, drinking Waragi gin and watching life play out beneath you.

I’ve discovered great writers: Jennifer Nansubuga Makumbi, the author of epic novel Kintu; and Okot p’Bitek, who penned Song of Lawino and Song of Ocol – narrative poems describing tensions between a man who wants to westernise and his wife, who embraces traditional ways of life.

Bitek is from Gulu, in Uganda’s north, where I’ve ended up waiting out the pandemic. It’s infamous because warlord Joseph Kony, of the viral Invisible Children video Kony 2012, comes from here. The region was decimated by a war that saw rebels kidnapping tens of thousands of children and turning them into child soldiers.

These days, it’s a fun place to be. Before coronavirus, people of all ages would hang out, drinking and laughing, sometimes dancing in the streets.

There are lots of stereotypes about white people in Uganda, many of them accurate. I remember unskilfully playing pool with two newly arrived friends when a comedian doing stand-up began making fun of us, saying all we knew about Africa probably came from The Lion King. In his voice I could hear both jocularity and exasperation.

Before my sister came from Ireland to visit me in January, she was repeatedly asked if she was “going volunteering” by people who looked confused when she told them it was a holiday.

There are widespread misperceptions of Uganda, and the African continent generally, across Ireland. People are imbued with charity messaging from a young age. Trócaire boxes and phrases like “think of the starving children in Africa” can conjure an image of a place where everyone is always depressed and desperate.

Media coverage – which usually focuses on what’s going wrong – contributes too. Of course charities do good work, but they are also trying to raise donations. There is a growing backlash against portraying Africans only as needy beneficiaries, because they’re not. Africans are also entrepreneurs, politicians, doctors, teachers, activists and artists. They include all kinds of people, rich and poor, just like the Irish.

With borders shut for the coronavirus lockdown, I’m stuck in Uganda indefinitely. But there’s nowhere I’d rather be.