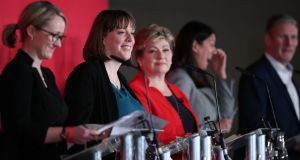 Jeremy Corbyn faced a backlash from within Labour on Sunday for nominating his former chief of staff Karie Murphy for a peerage while the party is under investigation for its handling of anti-semitism allegations. The Equality and Human Rights Commission (EHRC) is expected to examine the role of Ms Murphy, who resigned last year, in overseeing the handling of complaints about anti-semitism.

The Jewish Labour Movement said the nomination was “deeply inappropriate and must be rescinded immediately”. And Labour leadership candidate Jess Phillips also questioned the decision.

“The code of conduct for the Labour leadership competition tells me that I’m not allowed to speak about any members of staff who don’t have a right to reply. So I shall just slightly sidestep talking about Karie Murphy, but I don’t think that anybody should be given a peerage who is currently under investigation by the EHRC,” she told the BBC.

During the first leadership hustings in Liverpool on Saturday, Ms Phillips accused other candidates who were in Mr Corbyn’s shadow cabinet of not speaking out about the party’s handling of anti-semitism.

“Jewish people were scared of Labour winning the election,” she said.

“That’s deeply serious. The Labour Party has now lost the credibility to handle its own complaints system. We have lost the moral high ground to fight racism in this country because of the way we have handled anti-semitism.”

A YouGov poll of Labour members on Saturday put shadow Brexit secretary Keir Starmer in the lead on 46 per cent, well ahead of shadow business secretary Rebecca Long Bailey on 32 per cent. It put support for Ms Phillips at 11 per cent, with Lisa Nandy on 7 per cent and shadow foreign secretary Emily Thornberry on 3 per cent.

The poll found that Sir Keir was much more transfer-friendly than Ms Long Bailey, so that he would defeat her by 63 per cent to 37 per cent after other candidates were eliminated and their lower preferences distributed.

‘It’s about your principles’

During the hustings Sir Keir, who represents the London seat of Holborn and St Pancras, rejected the suggestion that the next Labour leader should come from the north of England.

Ms Long Bailey, who is from Salford outside Manchester, disagreed.

“It’s about your principles, but it certainly helps. And it certainly helps having grown up and lived in an area that has been affected and become quite angry about the centralisation of politics and financial power in London and the southeast. We’ve got to have someone that understands that. That can tell them quite clearly, we will shift power.”