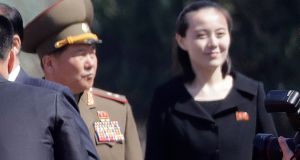 In this April 13th, 2017 photo, Kim Yo Jong is pictured during the official opening of the Ryomyong residential area, a collection of more than a dozen apartment buildings, in Pyongyang, North Korea.Photograph: AP/Wong Maye-E 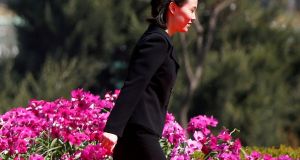 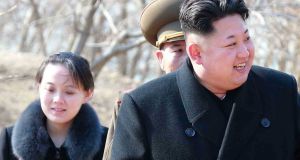 In a photo taken before March 2015, North Korean leader Kim Jong-un and Kim’s younger sister Kim Yo-jong tour a military unit on an island off the North Korean mainland near the sea border with South Korea in the East Sea. Photograph: EPA/KCNA

North Korea will send the younger sister of leader Kim Jong-un as a representative to the Winter Olympics in Pyeongchang, making her the first member of the North’s ruling dynasty to visit South Korea.

Kim Yo-jong, who was installed by her brother on the decision-making politburo in October and is deputy chief of the ruling Workers’ Party’s propaganda department, will attend the opening ceremony in the South Korean alpine resort on Friday.

US vice president Mike Pence will also attend the ceremony, and he has said he does not rule out talks with North Korea during the games.

The unification ministry in Seoul said Ms Kim would be included in the North’s delegation to the event. The North’s 22-person delegation will be led by the ceremonial head of state Kim Yong-nam, the Yonhap news agency reported.

“The government views the composition of the delegation – party, government and sports officials – as meaningful, given that their trip is aimed at celebrating the opening ceremony of the winter games,” the unification ministry said.

Such a high profile visit shows how inter-Korean tensions have eased of late. It also marks a major propaganda coup for the North and could cause strains between close allies Washington and Seoul by setting up an all-Korea versus the US rivalry.

Kim Yo-jong is the subject of unilateral US sanctions for her role in propaganda and censorship, but is not on a blacklist by the UN Security Council, imposed over the North’s series of missile launches and nuclear tests.

Mr Choe is subject to UN sanctions for his links to the North Korean government, while Mr Ri is not in breach of sanctions.

Officials said they would now see if the high-ranking members of the delegation contravened any sanctions imposed on North Korea and said they were in close consultation with the US.

They will explore ways for the delegation to enter South Korea, as they cannot fly by North Korean carrier Air Koryo or take a ferry because of sanctions. However, a number of exceptions have already been made.

Ms Kim is probably the most influential woman in North Korea alongside Kim Jong-un’s wife, Ri Sol-ju. She is thought to aged between 28 and 30. She was educated in Switzerland with her older brother, Kim Jong-un.

The Winter Olympics have sparked a bout of sports diplomacy after regional tensions were exacerbated by North Korea’s nuclear programme.

The two Koreas will march under a unified flag in the opening ceremony on Friday, and will field a joint women’s ice hockey team.

Japan’s chief cabinet secretary Yoshihide Suga said it was important not to ease sanctions. “We must not be fooled by North Korea’s ‘smile diplomacy’,” he told a news conference in Tokyo.