‘We’ve seen too many girls bleed to death’: eradicating FGM in Uganda 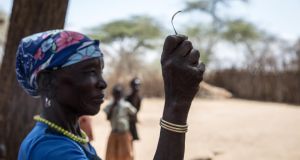 Female genital mutilation: Monica Cheptilak says she was the “chairperson of the knife cutters” in her tribe before FGM was outlawed in Uganda, in 2010. She shows her tool. Photograph: Sally Hayden

Across northeast Uganda, reformed “cutters” are apologising for their sins. “I used the same knife on seven girls,” one gap-toothed woman is announcing in front of an attentive crowd. “The first had HIV/Aids, so all seven got it. Now they’re all dead.”

In another village, at another community meeting, a skinny elder remembers watching girls bleed to death after mutilating them herself. A third woman says she worried about how hard her victims’ pregnancies would be later. A fourth was pulled away from cutting by God – but only after she quadrupled her price, to cash in on increased demand.

Female genital mutilation, or FGM, has been illegal in Uganda since 2010. With the threat of imprisonment hanging over offenders, local tribes say they’re changing their ways, with some benefiting from a wave of funding from organisations such as the United Nations and Irish Aid; the UN aims to stop FGM globally by 2030.

The UN calls FGM an extreme form of discrimination against women and girls, and a violation of their human rights, including the right to be free of torture

Tuesday is the 16th International Day of Zero Tolerance for Female Genital Mutilation. Officially, FGM includes all procedures that alter or damage the female genitalia for nonmedical reasons. The United Nations calls it an extreme form of discrimination against women and girls, and a violation of their human rights, including the right to be free of torture.

Different communities give different explanations for why they carry out FGM, but they usually involve inaccurate arguments about cleanliness and womanhood. FGM is also about control: it stops women experiencing sexual pleasure, which means they’re less likely to cheat on a partner or be otherwise promiscuous.

Traditionally, April marks the start of cutting season for the Pokot tribe. In the mountains of Karamoja, where mutilated girls have been left in caves for weeks to hide them from discovery, a “reformed cutter” named Chepureto Lebul is explaining the process.

On a day approved by the village’s male elders and the spirits they claim to consult, as many as 50 girls aged between nine and 11 would be made to remove their clothes and wash in cold water. They would then form a queue. “There were those that were cowards: they’d go to the back of the line, but they wouldn’t get away,” Lebul says. “When your daughter runs away it means she’s a coward; you haven’t raised her well.”

One by one the girls sit on a stone. They’re surrounded by older women, so they can’t escape as their external genitalia are cut out with a tool made from an arrowhead or a bent knife. Once the procedure is done, blood gushing from the girl’s legs, she’ll be carried to a resting spot. It will be two weeks before the girl can walk again – if she survives.

Lebul used to take 1,000 Kenyan shillings – €8 – or a goat for each girl mutilated, a fortune for a woman in such a deprived location. Although she claims to have quit the practice, she seems still to support it; she looks gleeful as she mimes what she used to do, pulling a young girl forward to act as the victim as she waves her cutting tool. Lebul boasts that she was strong and brave enough to operate on all 50 girls herself. Since stopping four years ago, she says, she has no income.

About 200 million women globally are living with female genital mutilation, according to the United Nations Population Fund, and three million more will be cut worldwide this year alone.

In Uganda the percentage of women put through FGM is low overall, at about 1.4 per cent, but among some tribes in the northeast of the country the rate is much higher. As many as 95 per cent of Pokot women experience it, and the local authorities and aid workers attempting to stamp it out are battling cultural traditions that are extremely powerful in an impoverished region where more than 90 per cent of people are illiterate.

Initiatives include paying former cutters two million Ugandan shillings, or €450, to give up the practice, creating alternative coming-of-age ceremonies, or enlisting spiritualists to ask the supernatural beings they worship to spare the girls.

Although FGM may seem like an act that women inflict on each other, men actually have the final say, according to many locals

Although FGM may seem like an act that women inflict on each other, men actually have the final say, according to many locals The Irish Times speaks to. FGM – or circumcision, as its proponents they call it – is seen as desirable because it makes a wife less likely to stray when her husband is away with their cattle. In the Pokot tribe a girl’s father decides when she’s ready for FGM, says Aturo Londor.

A man in his 50s with five wives and 20 children, Londor says it would create problems at home for him to marry someone who hadn’t been through it. “An uncut girl is not a woman,” he says. And “if I marry an uncut lady she will be abused by the cut wives”.

Of the 50 girls Lebul cut each year, as many as three would die, she says – their friends watching them bleed to death without proper medical help or care. Yet, Lebul says, she never felt bad about inflicting the pain. “I’ve never witnessed a girl crying, screaming or making noise, because they come with strength,” she said.

Ugandan girls who survive the procedure do not usually return to school. Considered adults afterwards, they are quickly married off to men who may have several other wives already.

Once the child bride gets pregnant, the problems begin. Most FGM victims cannot deliver a baby naturally, says Anguzu John, a health officer in the district of Nakapiripirit, yet many have no way to get to hospital for a Caesarean section. The Pokot people fall within John’s catchment area, which has only one ambulance for 200,000 people. So, instead of proper medical treatment, a new mother may face another life-threatening cut, one that allows her newborn to make it out of her alive.

FGM is most common in some African, Middle Eastern and Asian communities. It’s also a growing problem in countries to which members of those communities migrate. British police have questioned people arriving at UK airports and the Eurostar rail terminals as part of Operation Limelight, an attempt to tackle families taking girls abroad for FGM.

In Ireland a couple are currently facing trial at Dublin Circuit Criminal Court on a charge of genitally mutilating their daughter at their home in 2016.

Despite many northeastern Ugandan cutters now insisting they have given up the practice, the situation in the region’s schools tell a different story. Nasimyu Mwanamis, the principal of Katabok Primary School, close to Lebul’s former cutting spot, says there hasn’t been a single female graduate since 1969. “Fence the school, so we can keep the remaining ones,” she says, pleadingly. “By fifth year you won’t see any girl. They go for FGM, early marriages. No one is held responsible.”