Macron navigates Corsica’s ‘painful past’ on visit to island 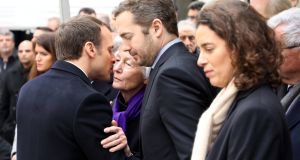 French president Emmanuel Macron adopted a hard line against Corsican nationalists in his tribute to Claude Érignac, the French prefect who was assassinated in Ajaccio on February 6th, 1996.

“What happened here 20 years ago cannot be justified, cannot be defended, cannot be explained,” Macron said on inaugurating the Place Claude Érignac on Tuesday. An olive tree marks the spot where Érignac fell, his face torn apart by bullets.

The killing was “an infamy that dishonours its perpetrators forever”, Macron continued. “The republic did not give in . . . Justice was done and will continue, without forgetting, without complacency, without amnesty.”

Yvan Colonna, the Corsican nationalist who pulled the trigger, is in prison in Arles, serving three life sentences. Two accomplices also remain in prison on the mainland. On February 2nd, the Corsican assembly passed a resolution demanding the “immediate return” to the island of all “political prisoners”, and amnesty over time.

Speaking before Érignac’s widow, Dominique, and their adult children, Marie-Christophine and Charles-Antoine, Macron categorically rejected all possibility of amnesty. He has also rejected nationalist demands that the Corsican language be given official status on a par with French.

Macron was more conciliatory during last year’s presidential campaign, when he told a rally in Corsica that “the republic is strong enough to welcome particularities within her ranks. If it is shown that the present framework does not allow Corsica to develop her potential, then we can envisage going farther and revising the constitution.”

Macron has so far shown no inclination to follow up his election promise. He may attempt to do so in an important speech in Bastia on Wednesday afternoon.

The nationalists are in a position of strength since winning 56 per cent of the vote in regional elections in December. They now hold 41 of 63 seats in the Corsican assembly.

A certain tension surrounded Macron’s two-day visit. Seemingly opposite signals were sent by two last-minute announcements. Jean-Pierre Chevènement, who was the interior minister and scourge of Corsican nationalists at the time of Érignac’s assassination, attended the homage to the prefect.

And Macron was to hold an unprecedented meeting on Tuesday night with the island’s leaders, Gilles Simeoni, president of the Corsican executive, and Jean-Guy Talamoni, speaker of the Corsican assembly.

The prefect’s widow had not returned to Corsica since the terrible night when her husband dropped her off in front of a theatre for a classical music concert before going to park the car. She was waiting for him in their balcony seats when Claude Érignac was gunned down on the pavement outside.

Mrs rignac looked sad and dignified with her white hair, flanked by her chidren. “Twenty years is a long, long time,” she said, her voice nearly breaking. “For 20 years, my children and I have lived constantly with this murder. We have only the memory of my husband Claude left. The terrorists who killed him sentenced us to that unending punishment.”

Claude Érignac insisted on playing tennis and riding a bicycle, despite having received death threats. He drove his own car and went around Ajaccio without a bodyguard, “to show we’re not afraid” and to prove that Corsica was a part of France like any other, the opposite of the “special status” demanded by nationalists.

Now Macron is caught between respect for Érignac’s memory and the wish he expressed on Tuesday “to organise a future for Corsica, without compromising with demands that would take her out of the bosom of the republic”.

Gilles Simeoni was the lawyer for Érignac’s killer, Yvan Colonna. But Simeoni advocates autonomy, not independence. He said it was his “duty” and “responsibility” to attend the tribute to Érignac, “to express our will not to run away from this painful past”.

Jean-Guy Talamoni, the leader of the more radical branch of Corsican nationalism, which wants independence, did not attend. Talamoni was close to the disarmed National Front for the Liberation of Corsica. At the time of the assassination, he said he “condemned the act but not its authors”.

Talamoni explained his absence at Tuesday’s ceremony to France Info radio: “In view of my record, not only would my presence be awkward, it would certainly not be welcomed by prefect Érignac’s family.”