The Irish Times view: One step closer to a no-deal Brexit 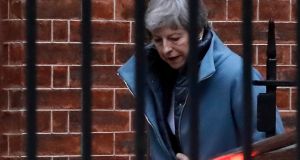 By bowing to pressure from the Brexiteers to rule out a long extension of the Article 50 process, British prime minister Theresa May has clearly put party – and her own survival – before the British national interest. Photograph: Tolga Akmen/ AFP/Getty Images

It is hard to keep count of the number of about-turns which UK prime minister Theresa May has made during the Brexit talks, but her latest is one of the most telling.

By bowing to pressure from the Brexiteers to rule out a long extension of the article 50 process, she has clearly put party – and her own survival – before the British national interest. She has continued the approach of doing enough to get through until tomorrow, with little or no apparent strategy.

A no-deal exit from the EU threatens tens of thousands of people’s livelihoods in the UK and could sunder relations with Europe for years to come, with huge political consequences.

Yet to satisfy a group of ideologically driven MPs who have themselves failed completely to outline any way to leave the EU on an orderly basis, this is what the prime minister is prepared to do.

If government is meant to be about achieving the best outcome for the most people, this is a kind of toxic anti-politics which gambles recklessly with people’s futures.

Perhaps it is no surprise that the EU side has decided that enough is enough and has given the UK an ultimatum. If you want a short extension to the Brexit process, European Council president Donald Tusk told MPs, then pass the withdrawal agreement through the House of Commons. Who can tell if this will lead to the deal being approved. If it does not, then the EU could decide to offer the UK one more choice – a long extension of article 50, or a no-deal exit.

Theresa May , by requesting only a short extension to article 50, sought to put the key decision in the hands of the EU leaders. By tying it to the approval of the withdrawal agreement, they have put the pressure back where it belongs – in London.

The problem is that the outcome remains unclear. Will the House of Commons approve the deal? And if it does not approve the deal, will the UK sign up for the conditions which the EU would be likely to put on a longer extension, if they even decide to offer one?

With just over a week to the March 29th exit date, it is extraordinary that we find ourselves in this position. The EU is – understandably – exhausted with Brexit and has lost its patience with London and particularly with May. It fears that any slack given to London will still not lead to a credible way forward emerging.

Nonetheless, it is incumbent on the EU to do everything possible to avoid a no-deal exit. The damage this would cause – to the UK and to the EU, particularly Ireland – is significant and very unpredictable.

The citizens of the UK and the EU should not have to suffer the consequences of a no-deal crash-out even if, in the UK case, their own leaders seem willing to run the risk.