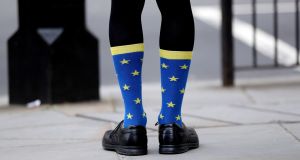 A Remain supporter sports European-flag socks: Ireland has saved Britain from the disaster of a hard Brexit and perhaps even from Brexit itself. Photograph: Jonathan Brady/PA

As we brace ourselves for that mockery of language, a “meaningful vote” on Brexit, my mind drifts back to 5.30am on Friday, December 8th, 2017. I was fast asleep but in my uneasy dream, my mobile phone was buzzing angrily and a bloke with an English accent was talking about Theresa May and Michel Barnier and Brussels and the withdrawal agreement.

I distinctly remember thinking within the reverie that it was not a good thing that this stuff was invading my dreams. And then it struck me that I was in fact awake, that the phone really had rung, that I had actually answered it and someone in London was asking me to go on the radio and comment on the deal that was emerging after all-night talks. Jesus, I thought, this has to stop.

And what a forlorn hope that was. As in a bad dream, the 15 months since then have been filled with unhappy returns to the same early-morning moment. Donald Tusk spoke of there being a special place in hell for the Brexiteers but it’s more a special kind of time that loops endlessly back on itself. And in that political half-life, with all its false dramas, it has been easy to forget what was so clear on that morning: Ireland has saved Britain from the disaster of a hard Brexit and perhaps even from Brexit itself.

The distinctive characteristic of the whole project since June 2016 has been its uncanny ability to keep alive two undead impossibilities. One of them is the glorious best-of-all-worlds Brexit offered to voters in the referendum. It could not survive contact with reality. It was dead on arrival, politically Brextinct. The other impossibility was a no-deal Brexit. It is impossible because even if the UK were to leave the EU on March 29th without a withdrawal agreement, it would still have to seek a trade deal with its main market. And the first items on the agenda would be the very commitments from which the British had walked away.

These zombies continue to stalk the wild terrain of a lost Brexitopia but the clarity of that morning is finally returning. In the endgame, the stage will be occupied by the two actual possibilities. One is withdrawal from the EU with the Irish backstop and a future of very close alignment with the customs union and the single market. The other is a second referendum and no Brexit. Why does it come down to this choice? Ireland.

Aha! say the Brexiteers. You are finally admitting it: the backstop is a conspiracy, a trap laid by the EU with the help of its compliant lickspittles in Dublin to keep us tied forever to Brussels’s apron strings. But it’s actually much weirder and more absurd than that. For if there is a trap it is an entirely accidental pincer movement created by forces that thought they were moving in opposite directions. Sometimes history unfolds with a sense of steely inevitability. Sometimes, as here, it is capricious and chaotic. If this were a conspiracy, it would have been one of the most cunning ever conceived. But much as we Irish pride ourselves on our deviousness, we can’t claim this one.

Sometimes history unfolds with a sense of steely inevitability. Sometimes, as here, it is capricious and chaotic

It is true, of course, that Ireland was always going to be the snag on which Brexit was caught. But the springing of this particular trap smacks not of inevitability but of a kind of historical whimsy: two opposed brands of Irishness converging without the slightest intention of doing so. In the days immediately before December 8th, 2017, May avoided a hard choice by telling everyone what they wanted to hear. First, she agreed that Northern Ireland would have to remain effectively in the customs union and the single market. Then, bawled out by Arlene Foster, she agreed that Northern Ireland would remain fully aligned with the rest of the UK.

This false departure is obviously worse than staying in. And this is the great, albeit unintentional, Irish favour to Britain. The Irish question is seen as complicating Brexit but what it has actually done is to clarify it. It burst the balloon of fantasy and grounded the project in existing historically determined realities. It is now forcing the real choice on Britain: go ahead with a messy and largely pointless Brexit or think again.

This reduction of the great moment of national liberation to such unheroic options will generate a great rage at the Irish. But history’s little joke is that the double Irish dose of political reality that has killed the Brexit dream is a strange and unintended concoction of green and orange potions. When the blame game really gets going, green and orange will equally make the Brexitopians see red.