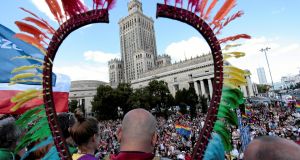 People march in the annual Equality Parade in front of the Palace of Culture and Science in Warsaw. File photograph: Agencja Gazeta/Dawid Zuchowicz/via Reuters

Poland’s ruling national conservative government has shifted its attention from Jews and migrants to homosexuals as the most pressing threat to daily life.

Ahead of an autumn election, Law and Justice (PiS) leader Jaroslaw Kaczynski has attacked an anti-discrimination plan for public schools as an “attack on Polish families and children”.

“This is social engineering that aims at changing people, focusing on the early sexualisation of children even under age of four,” said Mr Kaczynski in an attack on liberal identity politics. “It questions the natural identity of boys and girls.”

At a party conference the PiS leader promised his party would “defend Polish families” and traditional values.

The latest round in Poland’s increasingly polarised public debate surrounds a declaration signed by Rafal Trzaskowski, the mayor of Warsaw, promising measures to improve the situation of LGBT+ children in the Polish capital.

The plan vows to reactivate an LGBT+ shelter, implement anti-discrimination rules in city public bodies and draw on World Health Organisation (WHO) principles for education plans.

The proposals from the mayor, from the opposition liberal Civic Platform, have drawn ire from PiS rivals and the Catholic Church.

Poland’s commissioner for children’s rights has criticised the plan as unconstitutional for, in his eyes, attempting to reduce the influence of parents over how their children are educated.

Mr Trzaskowski dismissed this, saying his proposals would not impinge on parents’ rights because they could opt out their children from sex education classes.

He accused the PiS leader – a cat-owning, confirmed bachelor – of shoring up support with scaremongering as during the refugee crisis when PiS raised a “spectre of invasion of Poland by millions of immigrants . . . [bringing] rape and disease”.

“In fact, it was about helping a few thousand women and children, temporary humanitarian aid,” he wrote on Facebook. Similarly nonsensical, he said, were Mr Kaczynski’s concerns about “corrupting children”.

“In fact, it’s about tolerance – to protect our fellow citizens from hate speech, intimidation and lynching, to teach children that words hurt, and that there is no anonymity on the internet,” he wrote.

The row has electrified Poland, prompted heated debate online and sparked a protest of elderly women in front of Warsaw City Hall on Tuesday and a counterdemonstration of younger people.

As the row builds, organisers of a Gay Pride march in Lublin, southeast of Warsaw, have taken a court case against a town councillor who last year equated homosexuality with paedophilia.

Now well-known Poles are picking sides in the LGBT charter debate. Olympic sportswoman Zofia Klepacka came out against, saying her grandfather fought in the 1944 Warsaw Uprising for traditional values and that, as a result, she would “defend traditional Poland”.

“I give a strong no to promoting LGBT communities,” she wrote.

Responding to her, a 91-year-old uprising survivor said the doomed fight against Nazi occupation was about ensuring that everyone was treated with dignity and not as a sub-human.

“Anyone aware of what that dignity means, must remember that its foundation is freedom,” wrote Wanda Traczyk-Stawska. “That nobody can be mistreated because of their different skin colour, different views or sexual orientation. Provided no one gets hurt, one has a right to be different.”