EU leaders treading on eggshells as Brexit trundles on

Europe Letter: Believe it or not, the two-day summit is not just about Brexit 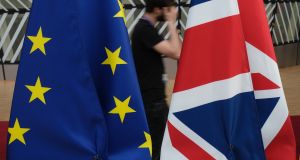 Leaders at the summit will discuss the EU’s most important relationship of the next decade: China. Photograph: Sean Gallup/Getty Images

One cautious step at a time. EU leaders, diplomats in Brussels were insisting, can only consider what is formally put in front of them.

If Theresa May refrains from asking for a long extension to the Brexit process – which she did in her letter to Donald Tusk on Wednesday – then the summit which begins on Thursday cannot consider one.

When she sent her letter requesting a short extension in the event that she gets the withdrawal agreement through the House of Commons next week, EU leaders could only hint at their openness to that approach.

Decisions can only be taken on the basis of facts. Journalists demand to know what is next, what if, but diplomats are careful, in crossing-that-bridge-when-we-come-to-it mode. And the agonisingly slow Brexit process trundles on to its denouement.

Brexit fatigue is increasingly visible and justified, we cannot give up seeking – until the very last moment – a positive solution

Part of the caution is concern that an ill-advised pronouncement would scare the horses, and be cited in the Commons as evidence of malign EU intentions.

Another part of the caution is that legal complications even over the dates of extensions are huge – lawyers have argued that, if the European Parliament is illegally constituted after the elections, because the UK has not participated, then all its legislative acts could be deemed illegal.

The concern that everything could still go horribly wrong with a disastrous no-deal permeates everything. Council president Donald Tusk reflected on it on Wednesday.

“Even if the hope for a final success may seem frail, even illusory, and although Brexit fatigue is increasingly visible and justified, we cannot give up seeking – until the very last moment – a positive solution, of course without opening up the withdrawal agreement,” he told journalists.

So on Thursday, the leaders will hold the door open to May, facilitating if possible her House of Commons endeavours for a third meaningful vote on the Brexit deal.

They will cast as little doubt as possible on her strategy, even though they all believe it has failed disastrously – never better expressed than by her friend, Dutch PM Mark Rutte, who compared her to the Monty Python knight who fights on gamely after each of his limbs is severed.

Next week will be time enough, if May fails again, to tighten the screws by demanding she change course if she wants a long extension.

Believe it or not, the summit on Thursday and Friday is not just about Brexit.

Most importantly, over dinner on Thursday night, leaders will discuss the EU’s most important relationship of the next decade: China.

Ostensibly it’s about preparing an EU-China summit on April 9th; in fact, its about coming together to find a coherent synthesis of perspectives on China as partner, competitor and rival.

A Chinese minister in Brussels during the week spoke of “10 convergences” in policy between Brussels and Beijing, ranging from defence of the global trading system and multilateralism, to opposition to nuclear proliferation, Iran, North Korea and Palestinian rights.

But there are important differences too. The EU wants a level playing field on issues like state subsidies of exports, access to the Chinese market and to state procurement programmes.

Brussels is concerned about steel and aluminum overcapacity and Chinese dumping on world markets, cybersecurity and intellectual theft.

It will be the first opportunity for leaders to discuss shaping a relationship that will define the union into the future far more than Brexit. As one diplomat described it on Wednesday, “the global positioning of the EU”.

But will it even be reported?