Report says two of 49 people injured in Sunday’s explosion, possibly due to grenade, have died 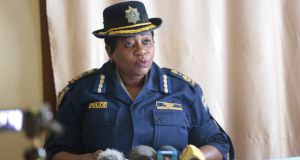 Following the explosion at a gathering of the ruling Zanu-PF in White City Stadium in Bulawayo on Saturday, the authorities have insisted that next month’s crucial general election will not be derailed by an incident they have called an act of “terrorism”.

It remains unclear who is responsible for the explosion or how security around the man who took over from former president Robert Mugabe – who was forced from power by the military last November – was breached.

Police have confirmed they are following different lines of inquiry, but no arrests have been made public yet. State-run newspaper the Herald reported on Monday that two of the 49 people injured in the explosion, suspected to have been caused by a grenade, have died.

A number of senior Zanu-PF politicians and state security officials were injured in the blast, including Mr Mnangagwa’s two vice-presidents.

In a television interview with the state broadcaster after the incident, Mr Mnangagwa said the explosion missed him “by inches” and he blamed his “usual enemies” for the attack. Although he has declined to specify who these people are, recent history suggests his main enemies are linked to Zanu-PF.

Mr Mnangagwa’s elevation to the position of president following Mr Mugabe’s forced resignation came at the expense of a Zanu-PF faction called Generation 40. This group is made up of young politicians who want to take the ruling party over from the older guard who fought the liberation war in the 1970s.

Since being forced to stand down by the military, the 92-year-old Mr Mugabe has also said he felt betrayed by Mr Mnangagwa, who was one of his two deputies, and has called his presidency illegal.

In the months since he took control Mr Mnangagwa has said his administration will do everything in its power to ensure the country’s first post-Mugabe general election is free and fair, and takes place in a peaceful environment.

Saturday’s attack has been widely condemned by the majority of political parties in Zimbabwe, but many people fear it could mark the beginning of a spate of pre-election violence.

The incident took place as a first group of 44 election observers from the European Union (EU) were deployed on the ground in Zimbabwe to begin their task of overseeing the poll.

Mark Stevens, the EU’s deputy chief observer, said the size of his team will increase to 144 before the day of the vote, and they will cover all 10 provinces in both urban and rural areas.

“They will observe the entire electoral process prior, during and after the harmonised elections,” he told reporters in Harare on Saturday.

The EU observer mission to Zimbabwe is the first that has taken place in the country since 2002, when the group’s head, Pierre Schori, was expelled on the eve of a presidential election. Election observers have also been invited from across Africa, the US, China, Russia and the British Commonwealth.