Escalation in fighting has wounded civilians, forcing many to flee and hampering aid agencies 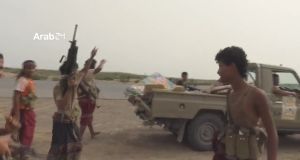 Armed members of Arab-backed Yemeni forces near the airport on the outskirts of Hodeidah, Yemen, on Wednesday. Photograph: ARAB 24 via Reuters

Fears of a humanitarian crisis in Yemen’s main port city, Hodeidah, grew as fighting spilled into residential districts on Wednesday after Arab coalition forces seized the airport from the Iran-aligned Houthis.

Residents said coalition aircraft were bombing Houthi positions on roads leading to the airport as the group dug in against an onslaught by the Arab alliance to take the city, the Houthis’ main port and the lifeline for millions of Yemenis.

The Saudi-led coalition intervened in the war in 2015 to roll back Houthi control of Yemen’s main population centres and reinstate its internationally recognised government. Coalition forces retook much of the south before the war, widely seen as a proxy conflict between Saudi Arabia and Iran, bogged down.

In a bid to break the stalemate, the coalition attacked heavily defended Hodeidah a week ago, pledging a swift operation to minimise civilian casualties and avoid disrupting vital aid to millions of Yemenis via the Red Sea port.

Coalition spokesman Col Turki al-Malki told Al Arabiya television that the alliance captured the airport on Wednesday and was now destroying nearby Houthi fortifications. He accused the group of placing tanks inside residential areas.

“We have been stuck in our houses for five days because we are afraid of going out due to the fighting. Our food supplies will run out within a week and there is no water,” Fatima (56) said, adding that bottled water was very expensive.

The escalation in fighting has wounded civilians, forced many to flee their homes and hampered humanitarian agencies, which are concerned about a potential cholera outbreak in the densely inhabited city as battles cut off water supplies.

“People are saying water has been disrupted in parts of Hodeidah already. Some areas even prior to the war were not even connected to the main water supply,” said Saleem Al Shamiri, livelihood co-ordinator at the Norwegian Refugee Council.

“We’ve done some initiatives . . . to educate people about safe water use as temperatures are rising,” he said.

A Hodeidah resident said a considerable number of residents were now leaving the city. “The streets are almost empty, deserted,” he said, adding that most were heading for Sanaa, Raymah and Wusab, in Houthi-controlled areas inland.

Kristine Beckerle, Yemen researcher at Human Rights Watch, said Hodeidah residents were worried about the dangers of land mines placed on roads they might take to escape the war zone.

“I wish we were seeing more from the international community,” she said. “Too many states are acting like there’s nothing they can do. There’s a lot they can do and now is the time to do it.”

UN officials estimate that in a worst-case scenario the fighting could cost up to 250,000 lives, especially if a cholera epidemic occurs in the widely impoverished region.

“Hodeidah port is operating as normal and the movement of ships is normal,” Col Malki said. “We have humanitarian and development plans for when we liberate the city.”

The UN World Food Programme said on Tuesday it was hastening to unload three ships at the port that contain enough food for six million people for one month.

Though the coalition pledged to try to avoid battles in crowded urban neighbourhoods, the Houthis were well dug into Hodeidah to protect the key supply line to the core northern territory they control, including the capital, Sanaa.

In a televised address, Houthi leader Abdul Malik al-Houthi said fighting would not cease even if the coalition regained the whole country. “The western coast will be a swamp that drowns and finishes the forces of the invaders and the aggressors.”

Houthi authorities set up loudspeakers on Hodeidah’s main streets playing martial chants and excerpts of al-Houthi’s speeches, another resident said. “The streets have been turned into a big audio stage to boost their fighters’ morale.”

The United Nations fears heavy fighting will worsen what is already the world’s most urgent humanitarian crisis, with 22 million Yemenis dependent on aid and an estimated 8.4 million believed to be on the verge of starvation. – Reuters