James Comey: ‘I am disgusted, I am horrified, I am embarrassed, I’m ashamed’ 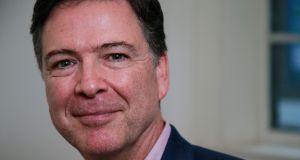 James Comey is in Ireland as part of the promotional tour for his book, A Higher Loyalty. Photograph: Nick Bradshaw

Former FBI director James Comey has said he was so ashamed by his country’s separation of children and parents at the Mexican border that he and his wife had considered telling people they were Canadian on arriving in Ireland.

Mr Comey, who was controversially removed from office by US president Donald Trump, is in Ireland as part of the promotional tour for his book, A Higher Loyalty.

The US has faced mounting criticism for the administration’s rigidly enforced policy of placing immigrant children into holding centres away from their families.

“I am ashamed of the way my country has acted with respect of those children. I am disgusted, I am horrified, I am embarrassed, I’m ashamed,” Mr Comey said in a public interview in Dublin on Friday.

“My wife and I were joking, not really joking; we wanted to tell the people on the customs line coming here that we were Canadian. And we were joking but it’s funny because it reveals a truth: I’m ashamed.”

However, he said many Americans felt the same way and there was an historic pattern of reaction to social issues, including the civil rights movement.

“I am horrified by what happened on our border but I wonder if something good might not come from that.”

He said the level of illegal immigration into the US was higher than a year ago but the issue was caused by conditions in Central American countries. Parents, he said, were walking 100 miles across the Sanoran desert carrying their children.

In an expansive interview lasting over an hour, the former chief of domestic federal law enforcement addressed, at length, his decisions on how to publicly handle the investigation into former US presidential candidate Hillary Clinton’s use of an email server. Mr Comey’s decision to announce a reopening of that investigation in the immediate run-up to the US election has been blamed, by many, for Ms Clinton’s unexpected loss.

Mr Comey, a vocal critic of the president, also spoke about their brief interactions and of Mr Trump being morally unqualified for office. However, he said that despite concerns, the US had a history of political “fevers” and said its long-established systems would prevail.

“They [the democratic institutions] are really hard to change,” he said.

“The rule of law is the spine. No president serves long enough to screw that up. Donald Trump, even if he were competent, he could not screw that up.”

Coronavirus death toll has risen to 132 with almost 6,000 confirmed cases