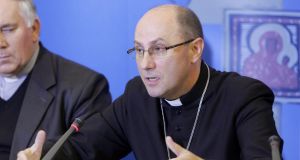 Archbishop Wojciech Polak of Gniezno, the Polish primate, insisted in a 2018 interview that Poland’s legal system ‘does not provide for the responsibility of church institutions for the acts of specific clergy’. Photograph: Mikolaj Torunski/ AFP

Poland’s Catholic Church is facing a tidal wave of compensation bills after the country’s highest court ruled it is liable for damages for people abused by its priests and religious.

The supreme court dismissed a challenge by a religious order, the Society of Christ Fathers, to a lower court ruling that it carried ultimate responsibility for compensating a woman abused by one of its priests.

In the lower court the woman, identified only as Kasia, was awarded one million zloty (€220,000) – which the order has already paid before launching a final legal challenge.

Despite the spreading coronavirus crisis, supreme court president Malgorzata Gersdorf ordered the case be taken on as prolonged legal uncertainty was having a negative impact on Kasia’s health.

Complaints of clerical sexual abuse have been gathering momentum in Poland after a documentary and feature film forced bishops into a public apology.

A study of church records, they said, indicated some 400 Catholic priests sexually abused more than 600 children since 1950. Until now, however, Polish bishops and order heads have insisted they are not legally responsible for sexual offences of their subordinates.

Archbishop Wojciech Polak of Gniezno, the Polish primate, insisted in a 2018 interview that Poland’s legal system “does not provide for the responsibility of church institutions for the acts of specific clergy”. Church guidelines from 2015 make a similar assertion.

But a series of rulings, now backed by the supreme court, draw on article 430 of Poland’s civil code. This states that those who order another to submit to directions “shall be liable for damages caused by default of this person while performing of the activity commended”.

When a lower court ruled that this paragraph applied to the Society of Christ Fathers in the Kasia case, the order filed a complaint with the supreme court. By dismissing the order’s complaint, the supreme court has removed a final legal hurdle to suing the Catholic Church in one of its last European bastions.

“The church is not a holy cow outlaw,” said Artur Nowak, a lawyer molested by a priest as a child and who now supports victims of paedophile priests. “This judgment throws away the episcopate guidelines, according to which only the perpetrator is responsible for paedophilia, not the church.”

While Poland’s judicial system does not recognise precedent, the supreme court ruling in the Kasia case gives a clear signal – to survivors and religious – for ongoing and future cases.

Prof Pawel Maricsz, chairman of European law at the University of Warsaw, said even with the full ruling yet to be published, it appeared to be “a big signal”.

“It’s a loud judgment less against the church but for victims,” he said, “and that will probably trigger additional litigation with financial consequences for the church.”

Lawyers already see an impact by giving legal certainty to recent rulings. Last October a court ordered a northern Polish diocese to apologise and pay €87,000 compensation to Marek Mielewczyk. A former altar boy, he was abused by a diocesan priest and featured in a ground-breaking documentary, Tell No One, viewed by 23 million people on YouTube since last year.

In the first instance, the court did not assign damages to the diocese; in the second instance the court did.

Another case earlier this month assigned damages to two bishops over former priest Pawel Kania. He was accused of abusing altar servers in four parishes over a decade, starting in 2002. After a 2005 complaint, that he offered boys money for oral sex in Wroclaw, he was transferred to another parish 300km away.

He was responsible for altar servers and school religious instruction but parents complained he was touching their children inappropriately during cinema and swimming trips.

Moved on to another parish, 220km further south, he was again responsible for altar servers. When a fellow priest complained, the local bishop – who had taught Kania in the seminary – suspended him briefly.

In December 2012 police raided a hotel room in Wroclaw and found Pawel Kania with an underage boy, a camera and flash drives containing child pornography. The young man the priest raped – in Warsaw, Fuerteventura and a monastery where Kania lived – said if he refused the trips, the priest threatened to take his younger brother.