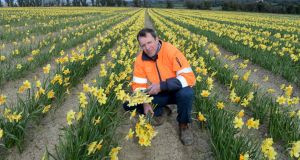 Until a few weeks ago Darragh McCullough (43) was preparing to ship 160,000 daffodil stalks from his 75-acre farm to the Irish Cancer Society for its annual Daffodil Day fundraiser.

Mr McCullough has been growing flowers for commercial sale for 20 years on a farm in Gormanston, Co Meath, and each year sells to the Irish Cancer Society at cost for its fundraiser.

Following the cancellation of the annual March 27th fundraiser due to the coronavirus outbreak, he was left with huge numbers of daffodils to try to sell.

His usual business model depends on selling flowers to supermarkets and shops, but “local trade has evaporated” in recent weeks, he said.

“In five hours I moved my business online and did what I had been threatening to do for years,” he told The Irish Times. He began advertising bouquets of flowers for €20 on social media.

Mr McCullough said the business had since been “inundated” with demand for the flowers, which he now delivers via courier.

“Probably in 24 hours we got 200 calls, which is very big for a farm. The only thing I’m concerned about is processing all of them,” he said. The farm has four full-time staff and about 40 daffodil pickers, he said.

There was “a huge fear” that the majority of the flowers would have had to be dumped, and it was a “nervous time for everybody” growing flowers commercially, he said.

But now, people were ordering flowers for relatives or parents they could not visit due to coronavirus restrictions, and bouquets to be sent to staff in hospital intensive care units, he said.

The public health crisis had provided his business with an “opportunity to bypass the middleman,” and sell directly to customers, he said.