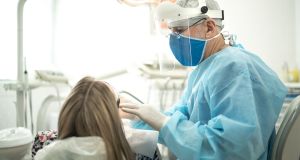 The Irish Dental Association said many members are concerned about operating due to increased prevalence of coronavirus in the community. File photograph: Getty

Dentists are heading towards a significant crisis due to lack of support and engagement during the Covid-19 pandemic, according to representatives from the sector.

A survey conducted by the dental association in July among almost 600 members found that half of all private dentists had reported that coronavirus had increased their costs by between 30 per cent and 50 per cent.

The dental association highlighted a particular problem with provision of adequate personal protection equipment (PPE). It was promised seven months ago, but never delivered.

In a letter to the dental association on June 4th, then minister for health Simon Harris said “subject to necessary approvals, they [the Health Service Executive] will be in a position to commence issuing PPE to dental practices in the next seven days”.

Dr O’Neill said many dentists are concerned about operating due to increased prevalence of the virus in the community.

“A lot of routine dentistry and emergency dentistry uses compressed air to dry teeth, to drive the machinery that we use. Aerosol generating procedures are one of the ways the virus can be spread,” she said.

“With the level of community transmission that is out there, the membership are now very concerned about the potential to contract Covid . . . while providing patient care, or to actually be one of the locations that creates an outbreak.”

Those with a medical card

Dr O’Neill said the lack of engagement with the sector on this issue “will have hugely negative consequences for patients”, with many practices opting to leave the Dental Treatment Services Scheme, which provides dental care to those with a medical card.

To date approximately 20 per cent of private dentists have withdrawn from the medical-card scheme, according to the dental association but it believes this number will fall further in the coming months. However, a Department of Health spokeswoman said the number of dentists who withdrew from the scheme was just under 10 per cent for the year.

“It’s end of year, they’ll sit down and look at financial impact of 2020 and dentists or their accountants will tell them they cannot afford to continue to provide care to medical-card holders because it’s costing so much money to do it,” said Dr O’Neill.

The dental association met the HSE alongside other unions on Wednesday morning for a briefing on vaccine rollout.

The Department of Health spokeswoman said “the department, in conjunction with the HSE and supported by guidance from Health Protection Surveillance Centre (HPSC), is examining the issue of the provision of PPE across all parts of the health service, including health service contractors,” she said.

The spokeswoman added that the department has been engaging with the IDA throughout the pandemic and is “preparing for further engagement on any additional measures to support the oral health of the public during these difficult times”.

Covid-19 vaccines Q&A: Why are targets being missed?