UK prime minister Theresa May has said that a hard border between Ireland and Northern Ireland 'cannot happen' after Brexit. Video: 10 Downing Street 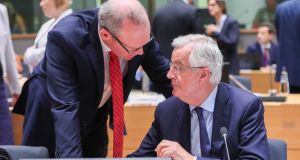 The British Brexit White Paper is largely unworkable and raises fundamental questions for the European Union, Michel Barnier has warned.

The EU’s chief Brexit negotiator on Friday reported to EU ministers in Brussels that the White Paper is not compatible in important respects with fundamental EU values, notably the integrity of the single market, is largely unworkable, and conflicts with EU economic interest.

There are elements in the paper, however, which could be worked on to find common ground, he said, promising that his team would work on the Brexit negotiations intensively over the summer months. But, with the Austrian presidency of the EU again reporting “no substantial progress” on the Irish “backstop”, Mr Barnier returned repeatedly at his press conference to the issue, demanding that the British come to Brussels next week to resolve the issue.

There would be no deal on withdrawal, or transition, or the future relationship unless there was agreement on the backstop, in the Withdrawal Agreement, 80 per cent of which has been agreed, he said.

The backstop agreement reached in December stated that, in the absence of another solution for the Border, Northern Ireland would effectively remain within the EU customs union, ensuring no hard border in Ireland.

Mr Barnier insisted, with 13 weeks to go, again that a “legally operative” backstop was a “prerequisite” to agreement on a Withdrawal Agreement in October – “all 27 member states insist on this” – and that the EU was open to other solutions which respect its single market’s integrity.

It is understood Poland suggested a failure to reach a deal on Ireland need not halt the process but they were firmly rebuffed by the rest of the 27.

Responding to questions about British prime minister Theresa May’s Belfast speech on Friday, Mr Barnier said that the EU had “worked creatively” to come up with one version of the commitment made by Ms May in December. He emphasised that “in no sense” was the EU “intent on creating a border” in the Irish Sea or dividing the UK.

It was necessary, he said, again to “de-dramatise” its proposal – “technical controls” on goods and agricultural produce that were akin to those already in place in Belfast on agricultural products entering the North from the rest of the UK.

He cited specifically its commitment to a free trade agreement, to a level playing field on issues such as state aids, and in particular to strong “convergence” between the EU and UK on internal and external security. In the latter regard, he said, the paper’s emphasis on the protection of fundamental rights and the role of the Court of Justice of the European Union in safeguarding them was particularly important. But his critique was sharper.

Citing the British willingness to apply an EU regulatory rulebook to goods trading across the border from the EU, he asked what that would mean to EU standards that were not related to border crossings, such as pesticide controls. How would the EU protect consumers if such issues were not covered? And he was sharply critical of proposals for policing multiple tariffs on the border.

How could customs officials verify the destination of goods? And could the EU delegate to a third country outside the union the business of collecting its taxes? The distinction by the British paper between goods and services was also problematic, Mr Barnier said, warning that a lack of regulation on the service components of goods would lead to unfair commercial advantages for UK firms.

The British customs proposal for “differentiated” tariffs – tariffs on goods destined to the UK and on those being shipped on to the EU, and which the UK would collect on its borders – are widely seen among the 27 as a clear breach of the single market’s integrity.

UK companies would be able to import raw materials at lower tariffs, one Dutch source said, and then sell on finished goods tariff-free to the rest of the EU at a significant competitive advantage.

That was never going to wash, the source said. And an unwillingness to trust the elaborate proposed British customs arrangement as secure has been fuelled by member-states’ awareness of a massive customs fraud by the Chinese through British ports arising from which the UK authorities face an EU fine of €2.7 billion.

The European Commission imposed the fine in March after the union’s anti-fraud unit, Olaf, reported that the UK had since 2007 allowed a massive Chinese fraud network evade paying the appropriate level of customs duties on textiles and footwear imports, to the EU using “fictitious and false invoices and incorrect customs value declarations at importation,” a practice known as “undervaluation fraud”.

The UK had been warned of the abuse, the commission insisted, and had failed to stop the practice. London disputes the scale of the fine and has also told Brussels, according to Politico, that it has implemented about 100 measures since 2010 aimed at fighting fraud, resulting in savings of £175 billion (€196) that would have otherwise gone unpaid.

But, not surprisingly, EU ministers considering the White Paper say they do not have full confidence in the ability or willingness of the UK authorities to verify imported goods’ destination or to track them following importation as the UK proposals on a common customs territory suggest.

Germany’s Europe minister has said he is growing “nervous” about the state of the negotiations. On his way into the meeting Michael Roth stressed urgency on agreeing a withdrawal deal in just three months time or risk a “no deal” Brexit.

“We have to be ready in October to agree the Withdrawal Agreement – this is the priority”, said Nathalie Loiseau, French minister for European affairs.

She added that the UK had still not provided a backstop solution that “can be accepted by the EU27”.

Ministers also considered a report from the commission on “preparedness” which urged member states to step up their planning for all Brexit eventualities.