Brexit: May calls for EU to ‘evolve’ position on ‘unworkable’ backstop

UK prime minister Theresa May has said that a hard border between Ireland and Northern Ireland 'cannot happen' after Brexit. Video: 10 Downing Street 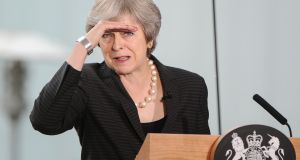 British Prime Minister Theresa May, takes a question from journalists after delivering a speech in Belfast. Photograph: EPA/Aidan Crawley

British prime minister Theresa May has reiterated her rejection of the Brexit backstop proposal and challenged the European Union to respond to her White Paper on Europe which she described as “principled and practical”.

And in her speech in the Belfast Waterfront Hall on Friday and with senior DUP politicians in the front row she emphasised that her government would never be “neutral” on Northern Ireland’s union with Britain.

In December the EU said it struck what Taoiseach Leo Varadkar described as a “bullet proof” backstop deal whereby in the absence of an overall UK-EU accommodation that Northern Ireland would remain in the customs union and have access to the single market while Britain would be outside such an agreement.

On Friday on the second and final day of her Northern Ireland visit she reiterated that she could not accept this interpretation of the December deal because it would mean the creation of a border between Northern Ireland and the rest of the UK.

“The economic and constitutional dislocation of a formal ‘third country’ customs border within our own country is something I will never accept and I believe no British prime minister could ever accept,” said Ms May.

“And as they made clear this week, it is not something the House of Commons will accept either,” she added.

She challenged the EU to reply to last week’s British government White Paper that proposes a free trade area in goods and agricultural products between the UK and the EU. She said it represented a “coherent package” and a “significant development” in the British position.

“Early in this process, both sides agreed a clear desire to find solutions to the unique circumstances in Northern Ireland through a close future relationship,” said Ms May.

If UK Govt don’t support current EU wording on Backstop in draft Withdrawal Agreement, then obligation is on them to propose a viable and legally operable alternative wording that delivers same result: no border infrastructure. Clear UK commitments were made on this in Dec+March.

“It is now for the EU to respond, not simply to fall back onto previous positions which have already been proven unworkable, but to evolve their position in kind,” she added.

“The White Paper is our plan for the future. It is the way to the stronger and brighter tomorrow that I know awaits the whole United Kingdom. Now we must have the courage and the determination to seize it,” she said.

Ms May said the White Paper proposals “will also protect and strengthen our union by ensuring there is no hard border between Northern Ireland and Ireland and no border in the UK”.

With DUP leader Arlene Foster and colleagues Nigel Dodds and Emma Little Pengelly in the audience Ms May spoke about her commitment to the union and how her party’s name was the “Conservative and Unionist Party”.

“And, as we leave the European Union, I have made protecting and strengthening our own precious Union, by making sure the deal we strike works for every part of the UK, an absolute priority,” she said.

“I believe in the partnership of our four great nations in one proud union and I want it to endure for generations to come. So a government I lead will never be neutral in our support for the union. We will always make the case for it,” she added.

Ms May said she also respected that a substantial section of the Northern Ireland population identified as Irish and aspired to a united Ireland.

“I will always govern in the interests of the whole community in Northern Ireland and not just one part of it,” she said. “We are absolutely committed to parity of esteem, and just and equal treatment irrespective of aspiration or identity.”

On the possibility of Ian Paisley being suspended from the House of Commons for failing to disclose two family holidays paid for by the Sri Lankan she was asked was she worried about losing one of the 10 DUP MP votes that are propping up her government.

She sidestepped the question saying it was a matter for the House of Commons to decide what penalty should be imposed on the North Antrim MP. She also said the confidence and supply agreement with the DUP was “delivering key decisions that are important across the whole of the United Kingdom”.

Earlier on Friday Ms May met a Sinn Féin delegation led by party leader Mary Lou McDonald, who said the engagement was “anything but reassuring”.

Ms Foster agreed with the British prime minister, saying it was now up to the EU to come up with “innovative and flexible solutions” on the hard border question.