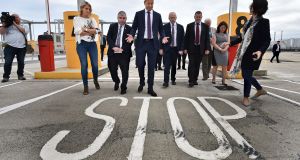 Taoiseach Leo Varadkar will discuss a Northern Ireland-only backstop with the British prime minister Boris Johnson when the two men meet for talks in Dublin on Monday morning.

However, Mr Varadkar will also want to know how Mr Johnson could pass any revised withdrawal agreement through the House of Commons.

Mr Varadkar stressed that negotiations on Brexit can only take place between the UK government and the EU taskforce, but told journalists at Dublin Port on Sunday he was willing to see if there was common ground on a “Northern Ireland-specific” solution. The idea of an all-island regulatory regime which could see Northern Ireland diverging from the rest of the UK is something which has been raised by Mr Johnson in recent days.

Of course we’d like the United Kingdom as a whole to stay in the customs union, but that’s their decision, not ours

“I don’t know if we can find some common ground around a Northern Ireland-unique solution, but we’ve always said as a Government that that’s something that we’re open to,” Mr Varadkar said.

“Of course we’d like the United Kingdom as a whole to stay in the customs union or a single customs territory, but that’s their decision, not ours. So it’ll be interesting to see if we can explore tomorrow if we could find some common ground around a Northern Ireland-specific solution,” he said.

Mr Johnson arrives in Dublin on Monday for his first meeting with the Taoiseach since becoming prime minister in July, with his administration under pressure following the loss of vote in parliament last week, the expulsion of Tory rebels from the party and, this weekend, the resignation of a senior cabinet minister, Amber Rudd.

Ms Rudd quit in protest against the British government’s approach to Brexit and the expulsion of 21 MPs last week.

A number of other cabinet ministers, including Northern Ireland secretary Julian Smith, are rumoured to be on the verge of resigning. Justice secretary Robert Buckland said he was not resigning but suggested he would do so if Mr Johnson sought to defy the law by refusing to seek an article 50 extension.

But Foreign Secretary Dominic Raab said Mr Johnson will “test to the limit” a law requiring him to delay Brexit rather than leave the EU without a deal, with a possible supreme court challenge. Mr Raab said the UK government would behave lawfully but said the law would be challenged in the courts.

Meanwhile, Minister for Finance Paschal Donohoe is visiting London on Monday where he will meet with City investors. He will also meet the Labour shadow chancellor John McDonnell, it is understood.