Brexit: Johnson says UK wants no checks at or near Irish border 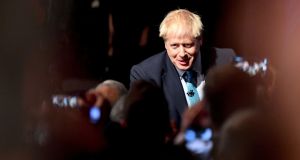 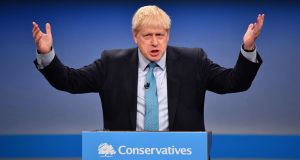 British prime minister Boris Johnson said the UK will table “constructive and reasonable proposals” as an alternative to Brexit deal and warned that a rejection of this plan would result in a “no-deal” exit.

In a speech to the Conservative Party conference in Manchester setting out his deal-or-no-deal strategy, Mr Johnson said the UK would “under no circumstances” have checks at or near the border in Northern Ireland under his proposal to find a compromise on a Brexit deal in order to leave the EU on October 31st.

He was delivering his first speech as Conservative leader to the party’s conference ahead of the UK formally submitting his proposed alternative to the Brexit deal to Brussels later on Wednesday.

“We will respect the peace process and the Good Friday Agreement and by a process of renewable democratic consent by the executive and assembly of Northern Ireland, we will go further and protect the existing regulatory arrangements for farmers and businesses on both sides of the Border,” he said.

The prime minister said the proposal would allow the UK “whole and entire to withdraw from the EU.”

The president of the European Commission, Jean-Claude Juncker, and Mr Johnson are due to speak later about the UK’s proposals for altering the backstop. Technical discussions between UK and EU teams will also take place, the commission has confirmed.

Mr Johnson said that the plan was a compromise by the UK and hoped that the EU understood this and compromise too, but he cautioned that the UK was willing to leave the bloc without an agreement.

“If we fail to get an agreement because of what is essentially a technical discussion on the exact nature of future customs checks when that technology is improving the whole time, then let us be in no doubt… about the alternative - the alternative is no-deal,” he said.

This was not an outcome that the UK wanted but that “it is an outcome for which we are ready,” he said.

The Tory leader criticised UK parliamentarians for blocking Brexit and warned that there would be “grave consequences for trust in democracy” if the UK did not leave the EU by the end of the month.

In a combative speech, Mr Johnson mocked UK parliamentarians opposing Brexit and pitted their opposition against the wishes of the British people to leave the EU more than three years since the vote.

“I am afraid that after 3½ years people are beginning to feel that they are being taken for fools. They are beginning to suspect that there are forces in this country that simply don’t want Brexit delivered at all,” he said.

“And if they turn out to be right in that suspicion then I believe there will be grave consequences for trust in democracy. Let’s get Brexit done on October 31st.”

Mr Johnson ridiculed the Brexit paralysis in the House of Commons saying that “if parliament were a laptop, then the screen would be showing the pizza wheel of doom,” a reference to the icon that shows on a stalled computer.

Criticising parliament for blocking Brexit, Mr Johnson said: “The sad truth is that voters have more say over I’m a Celebrity over than they do over this House of Commons which refuses to deliver Brexit, refused to do anything constructive and refuses to have an election.

“If parliament were a reality TV show, then the whole lot of us I’m afraid would have been voted out of the jungle by now,” he said. “But at least we could have the consolation of watching the Speaker [John Bercow]being forced to eat a kangaroo testicle.”

Forcefully setting out his idea for a post-Brexit vision of the UK, Mr Johnson spoke of the “opportunities that Brexit will bring, not just to take back control of our money and our borders and our laws” but “to regulate differently and better” and to be “an independent global campaigner for free trade.”