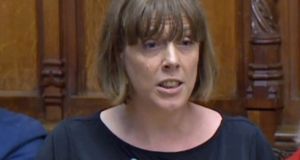 A man has been arrested after allegedly trying to “kick the door” of a Labour MP’s constituency office while shouting that she was a “fascist”.

Jess Phillips, who represents Birmingham Yardley, said her staff had to be locked in the office while the man tried to “smash the windows” and “kick the door”.

She told LBC radio: “I’ve only just heard about it myself, but my staff had to be locked into my office while the man tried to smash the windows and kick the door, I believe.

“I don’t know what I can say because the man has been arrested. But he was shouting that I was a fascist, apparently.”

West Midlands Police confirmed that a 36-year-old man had been arrested on suspicion of a public order offence. A statement from the force said: “Police were called to reports of a disturbance outside an address on Yardley Road in Acocks Green, Birmingham, just before 2.25pm this afternoon.

“A 36-year-old man has been arrested on suspicion of a public order offence and possession of cannabis. He’s been taken into police custody and will be questioned in due course.”

Ms Phillips told Sky News that she would not “leap to blame Boris Johnson for this attack”.

She added: “We need to all be better and he is the prime minister. I wish he would just, instead of trying to divide, to try to lead. I think that’s what the country wants to see.”

She said everyone in parliament had a “case to answer” regarding their conduct, but that the only one with a “specific strategy” to provoke hate and aggression in the country was Mr Johnson.

“What he is doing is not human. It is manipulative, it is purposeful, it is his strategy. He wants people like me to be under threat,” she said.

Ms Phillips was among the MPs who told the prime minister to apologise for his language in the House of Commons on Wednesday, saying his choice of words had been designed to “inflame hatred and division”.

She also tweeted on Wednesday that she had received an “anonymous letter” to her constituency office which read: “It was rather prophetic that Boris Johnson should say: ‘I would rather be found dead in a ditch.’ That is what will happen to those who do not deliver Brexit. ”

Ms Phillips said: “10 Downing Street might think we are ‘humbugs’ about his words but they are literally being used in death threats against me.” – PA