Brexit: Johnson and von der Leyen to meet in bid to save talks 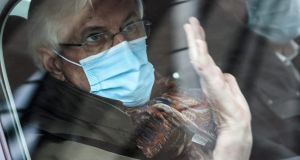 Boris Johnson and Ursula von der Leyen will meet face-to-face in Brussels in the coming days in a final effort to salvage negotiations on Britain’s future relationship with the European Union.

The British prime minister and the European Commission president agreed to meet after they held a 40-minute phone call on Monday to take stock of the negotiations.

“We agreed that the conditions for finalising an agreement are not there due to the remaining significant differences on three critical issues: level playing field, governance and fisheries. We asked our chief negotiators and their teams to prepare an overview of the remaining differences to be discussed in a physical meeting in Brussels in the coming days,” they said in a joint statement.

Neither side confirmed the timing of the meeting but it is expected to take place on Wednesday, ahead of Thursday’s meeting of the European Council.

Following her conversation with Mr Johnson, Ms von der Leyen spoke on Monday night to EU leaders including Taoiseach Micheál Martin. It is understood that she believes that a path to a deal can still be found, despite the differences between the two sides.

British officials played down the likelihood of a breakthrough, with one senior figure telling the media that there had been no tangible progress in the talks since last Friday. “It’s clear this must now continue politically. Whilst we do not consider this process to be closed, things are looking very tricky and there’s every chance we are not going to get there,” one source said.

Minister for Foreign Affairs Simon Coveney, who was in Brussels on Monday for a meeting with EU foreign ministers, warned that the mood was starting to shift away from making compromises to secure a deal towards preparing for a no-deal outcome.

He said there was “a great deal of frustration on the EU side” and that many foreign ministers were becoming resigned to a no-deal.

Mr Coveney will brief the Cabinet on Tuesday morning on the state of the Brexit talks and on the preparations for January 1st. He is expected to assure Ministers that any delays in freight using the UK land bridge will not affect the supply of the Covid vaccine, as arrangements have been made to transport supplies of the vaccine directly to Ireland.

The British government has agreed to drop treaty-breaking clauses in the Internal Market Bill and in a forthcoming taxation Bill if it reaches agreement with the EU in a joint committee on how the Northern Ireland protocol should be implemented.

The announcement came as cabinet office minister Michael Gove and European Commission vice-president Maros Sevcovic chaired a joint committee meeting in Brussels and ahead of a vote on the clauses in the House of Commons.

MPs voted on Monday night by 357 to 268 to restore the offending clauses to the Bill, but peers are almost certain to remove them again when the legislation returns to the House of Lords on Wednesday.

EU member states have already appealed to the European Commission to roll out contingency plans for a no-deal outcome, and it is expected to act swiftly if the negotiations conclude without success.

Yet Dutch foreign minister Stef Blok warned that the EU should not be rushed into a hasty compromise and insisted there was ample time for further talks before December 31st.

“Don’t let time pressure tempt us to make concessions that are unwise,” Mr Blok told Dutch media. “We must use the time it takes to negotiate and not let ourselves be led to a hasty compromise.”