On the witness stand, Sarkozy summons the righteous indignation of old

Former French president, up on corruption charges, expects to be ‘cleansed of infamy’ 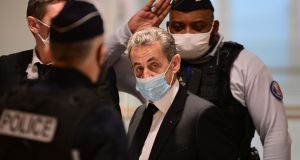 Former French president Nicolas Sarkozy arrives for a hearing of his trial on corruption charges at Paris courthouse. Photograph: Martin Bureau/AFP via Getty

Righteous indignation was always Nicolas Sarkozy’s strong suit. When the former president was finally called to the witness stand on Monday, he was brimming over with fury.

Only one other French president, Jacques Chirac, has ever been placed on trial, and Chirac was too old and ill to appear in court. On Monday, Sarkozy became the first former French head of state to testify in his own defence.

“I have never committed the slightest act of corruption,” Sarkozy declared in opening remarks, minutes after the court heard recordings of five potentially compromising telephone exchanges between him and his co-defendant and lawyer, Thierry Herzog.

Sarkozy expressed his “anger” and “indignation,” adding that he expected to be “cleansed of this infamy”. Just before the trial opened on November 23rd, he had promised to “explain myself before the tribunal, because I have always fulfilled my obligations”.

The trial adjourned for several days while doctors considered whether to postpone it because Gilbert Azibert (73), the third co-defendant, is in ill health. The court refused. Through testimony last week, Sarkozy showed his impatience by sitting with one foot crossed over his knee, jiggling up and down.

“This is the first time I’ve had the chance to explain myself before impartial judges,” he said on Monday.

Sarkozy was so talkative that Judge Caroline Mée repeatedly had to interrupt him. “Excuse me. Sorry. Pardon, Madam,” he kept saying.

Recorded telephone conversations from February 2014 are the basis of the financial prosecutor’s case against Sarkozy. Herzog says they are inadmissible, because they violate lawyer-client confidentiality.

In one of the more damning recordings, Herzog said of Azibert: “With everything he’s doing [for Sarkozy], we can do him a favour.”

Azibert was then a judge at the Cour de Cassation, France’s supreme court. The prosecutor claims Sarkozy, Herzog and Azibert concluded a “pact of corruption” whereby Azibert would inform them and attempt to influence colleagues who were ruling on Sarkozy’s appeal in a separate corruption case. In exchange, Sarkozy allegedly promised to use his influence to help Azibert obtain a job he wanted in Monaco.

When Sarkozy was about to leave for a private weekend in Monaco with his wife Carla Bruni, Herzog suggested the former president should “give a leg up” to Azibert.

“Don’t worry. Tell him I’ll take care of it because I’m going to Monaco and I’ll see the prince,” Sarkozy said.

But in court on Monday, Sarkozy pleaded his innocence. “But Gilbert, I didn’t even know there was a review court in Monaco,” he said, turning towards his co-accused.

“But my life is giving a leg up,”Sarkozy said two hours into his testimony. “Because my life has been 40 years in politics. That’s all [politics] is. Giving a leg up.”

The conversations took place on a so-called burner phone purchased under a false name, because Sarkozy and Herzog had been tipped off that their normal telephones were tapped. Magistrates spent years attempting to identify the mole who alerted them.

Sarkozy was later recorded telling Herzog that he had not taken up Azibert’s case in Monaco after all. The prosecutor says they had been alerted that the burner phone too was under surveillance.

If the accused are, as the prosecutor asserts, “hardened delinquents”, they were particularly inept. Sarkozy lost his appeal to the Cour de Cassation, and Azibert did not obtain the post he wanted in Monaco.

But under French law, the outcome of the “pact of corruption” is immaterial. Intent is sufficient. The trial is scheduled to finish this week. The defendants could in theory be sentenced to 10 years in prison and fined €1 million each.