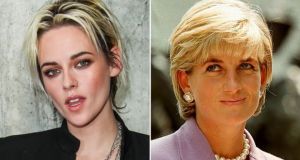 Kristen Stewart and Diana. The US actor is set to play the princess in the new film. Photograph: AP; AFP/Getty Images

British actors will be barred from auditioning to play Prince William in a forthcoming film because of restrictions introduced after the UK separates from the EU in January.

A new casting notice asking for boys aged between nine and 12 years old, who could conceivably play William at age 11, stipulates that only European passport holders can apply. “NOT British-European,” warns the note, “due to new Brexit rules from 1st January 2021.”

Amy Hubbard, who is the casting director on the film – and daughter of the veteran Irish casting director Ros Hubbard – says it is common practice on films for key roles to be filled by actors who share citizenship with the financiers.

In order to qualify for various grants and tax breaks, and to meet eligibility criteria for some film festivals and awards, productions must fulfil a number of quotas, which can include nationality. The separation of the UK from the rest of the European Union is therefore likely to affect the potential employability of those without EU passports who are seeking work on particular projects.

Spencer, a biopic of Diana, princess of Wales starring Kristen Stewart and directed by Jackie’s Pablo Larraín, is due to shoot in Germany for three months early next year. The film is set at Sandringham House, Queen Elizabeth’s private estate in the English county of Norfolk, over three days during the Christmas period in the early 1990s, when Diana is said to have realised her marriage to Prince Charles was over.

Larraín has spoken of the film as an anti-fairytale, saying: “When someone decides not to be the queen, and says, I’d rather go and be myself, it’s a big, big decision, a fairy tale upside down. I’ve always been very surprised by that and thought it must have been very hard to do. That is the heart of the movie.”

“It’s one of the saddest stories to exist ever,” said Stewart, discussing her preparations for the role, “and I don’t want to just play Diana – I want to know her implicitly.” The actor added that she was finding mastering the accent “intimidating as all hell”.

The princess of Wales was previously played on the big screen by Naomi Watts (in little-loved 2013 biopic Diana), while Emma Corrin is currently picking up plaudits for her portrayal in Netflix series The Crown. – Guardian