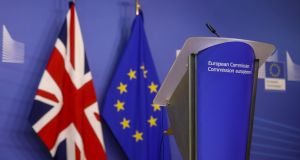 The two chief negotiators, Michel Barnier and David Frost, issued a joint statement in which they said it was clear no deal could be found at present. Photograph: Simon Dawson/Bloomberg

Talks between Britain and the European Union have stalled after a week of negotiations in London, with rising pressure on Brussels to roll out no deal contingency plans.

The two chief negotiators, Michel Barnier and David Frost, issued a joint statement in which they said it was clear no deal could be found at present, with the two sides split over three issues that have long prevented a breakthrough.

“After one week of intense negotiations in London, the two chief negotiators agreed today that the conditions for an agreement are not met, due to significant divergences on level-playing field, governance and fisheries,” the joint statement read.

“On this basis, they agreed to pause in order to brief their principals on the state of play of the negotiations.”

With just weeks until the end of Britain’s transition period, the failure to reach a breakthrough raises the prospect of an abrupt change to default trade terms including tariffs on sales to Britain, an outcome forecast to cause widespread disruption and devastate some Irish exporters.

In Dublin, Government sources said that while a deal remained possible, the two sides remained significantly apart on the outstanding issues. However, it is understood that significant concessions from both sides which might lead to a deal were always likely to be the call of the prime minister and the commission president, in consultation with the member states.

One source suggested that big gaps remained between the two sides, but that they could be bridged. The Irish analysis is that the outcome of the talks depends significantly on whether Mr Johnson can sell a compromise deal to Tory MPs as “taking back control”, the slogan of the Brexit campaign.

Sources emphasised the technical difficulties in agreeing on a document that ran to 800 pages and involved multiple compromises.

But another Government source in Dublin was more downbeat, saying the biggest problem was a lack of trust between the two sides.

The breakdown follows a tense week in which EU member states, including France and the Netherlands, warned Mr Barnier not to go beyond his mandate in what he offered to Britain to clinch a deal, while the Frenchman warned he may need more flexibility for an agreement to be reached.

Mr Barnier warned Mr Frost this week that a breakthrough needed to be reached by Friday, or it could not be guaranteed that a deal would be in place by January 1st, as it needs to be ratified by parliaments on both sides in a process that requires more time than is available.

Earlier on Friday, the EU side warned that a deal would be conditional on Britain’s full implementation of the withdrawal agreement, including provisions for Northern Ireland designed to avoid a hard border.

It comes after a spokesman for the British government said Mr Johnson still intended to reintroduce the UK’s Internal Market Bill treaty-breaking clauses that were removed by the House of Lords.

The spokesman also confirmed that the British government would next week introduce a taxation Bill that is expected to include clauses allowing British ministers to determine which goods moving from Britain to the North should be considered at risk of moving into the EU single market and are subject to tariffs.

Minister for Foreign Affairs Simon Coveney said this week it would not be possible for a deal to be struck if the British government pressed ahead with such a plan, while the president of the European Council Charles Michel described it as a “rule of law” issue.