London to drop treaty-breaking clauses if NI protocol accord struck 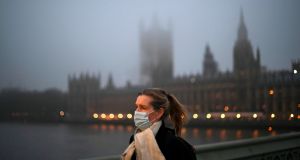 “After three months of posturing, undermining our reputation in the world, today, an hour before the debate begins, we perhaps see some preparations for the brakes being applied before we go over the cliff,” says Labour’s shadow business secretary Ed Miliband. Photograph: Daniel Leal-Olivas

The British government has agreed to drop treaty-breaking clauses in the Internal Market Bill and in a forthcoming taxation Bill if it reaches agreement with the EU in a joint committee on how the Northern Ireland protocol should be implemented. The announcement came as cabinet office minister Michael Gove and European Commission vice-president Maros Sevcovic chaired a joint committee meeting in Brussels and ahead of a vote on the clauses in the House of Commons.

Downing Street said in a statement that the clauses were always intended as a safeguard in case the joint committee failed to find “satisfactory solutions” to three issues in the protocol: how to determine those goods at risk of entering the EU market; removing export declarations for Northern Ireland goods moving to Great Britain; and ensuring that state aid provisions would not affect the rest of the UK.

“Discussions continue to progress and final decisions are expected in the coming days. If the solutions being considered in those discussions are agreed, the UK government would be prepared to remove clause 44 of the UK Internal Market Bill, concerning export declarations. The UK government would also be prepared to deactivate clauses 45 and 47, concerning state aid, such that they could be used only when consistent with the United Kingdom’s rights and obligations under international law,” it said.

“Good progress continues to be made regarding the decision as to which goods are ‘at risk’ of entering the EU market. Talks continue this afternoon. In the light of those discussions, the government will keep under review the content of the forthcoming taxation Bill.”

The taxation Bill, which is due to be introduced on Tuesday evening, says that “provision (including provision imposing and regulating new duties of customs) may be made in connection with goods in Northern Ireland and their movement into and out of Northern Ireland”.

Introducing a debate on the Internal Market Bill, cabinet office minister Paul Scully suggested that if the joint committee agreed on how to implement the protocol, the offending parts of the taxation Bill would also be removed.

“The taxation Bill and this Bill work in lockstep,” he said.

Labour’s shadow business secretary Ed Miliband said that although he heard “the grinding wheels of the climbdown” in the minister’s statement, the damage was already done.

“After three months of posturing, undermining our reputation in the world, today, an hour before the debate begins, we perhaps see some preparations for the brakes being applied before we go over the cliff,” he said.

“I am not going to give the government any credit for that, and I do not take their word for it either. The one thing that this whole sorry saga has shown the world beyond any doubt is that this government’s word is not their bond – they cannot be trusted, because they are willing to rip up international agreements they made less than a year ago.”