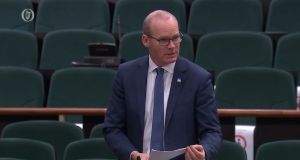 The mood is starting to shift among EU leaders away from securing the compromises necessary to reach an agreement to preparing for a no-deal outcome, Minister for Foreign Affairs Simon Coveney warned on Monday night, after another day of inconclusive Brexit talks.

Mr Coveney also spoke about “a great deal of frustration on the EU side, not just within the EU negotiating team . . . but also across member states” and said that many EU foreign ministers were becoming resigned to a no-deal.

He was speaking after a day of meetings at the EU foreign affairs council in Brussels, while negotiations continued between EU negotiators and British representatives. Mr Coveney also spoke to the EU chief negotiator Michel Barnier in Brussels.

Mr Coveney said the negotiations needed a “political intervention from the very top” to break the deadlock, but if no agreement was reached by the time EU leaders meet in Brussels on Thursday for the December summit, EU leaders are likely to turn their attention to preparing for a no-deal on January 1st.

Later on Monday night, the European Commission President Ursula von der Leyen and the British prime minister Boris Johnson announced that they would meet in Brussels in the coming days. Earlier on Monday Mr Barnier said that Wednesday had to be the final deadline for reaching agreement in the talks, though previous deadlines have all been breached.

In Dublin, Government sources were gloomy about the lack of progress in recent days but said the meeting between Mr Johnson and Mrs von der Leyen was a sign that the logjam could be broken. Officials also said the withdrawal of the British government of clauses in the Internal Market Bill – which threatened to unilaterally set aside previous agreements with the EU on Northern Ireland – was a good sign.

However, some senior officials in Dublin, who until now have expected that the British government would conclude a deal, are no longer convinced. One described the mood in Brussels as “incredibly downbeat”.

Mr Coveney is due to update the Cabinet on Tuesday morning on the position with the talks, and on the preparations for Brexit, whether a deal is agreed or not.

It is understood Ministers will be assured that the supply of Covid vaccines will be unaffected by a no-deal Brexit as preparations have been made to transport the vaccines directly to Ireland from the EU without passing through the UK. There are fears of significant delays in freight travelling via the UK landbridge.

Meanwhile, the Oireachtas agriculture committee will on Tuesday hear there may not be time for the agri-food sector to adjust to a deal, even if one is struck.

In hearings on Brexit on Tuesday, Dairy Industry Ireland has warned “that now there is insufficient time . . . to adjust to the outcomes of a prospective agreement, if indeed it is reached.”

Director Conor Mulvihall will say the transition period “has [left] our businesses with no lead time to implement significant changes and continued uncertainty rather than the promised clarity.” Adjusting to a “radically new trading and economic relationship” in such a short timeframe is “neither possible nor realistic”.

Meat Industry Ireland will say that “the failure of political negotiations has left our sector . . . in the unenviable position of not being able to plan for what is, at this extremely late stage, an uncertain future.”