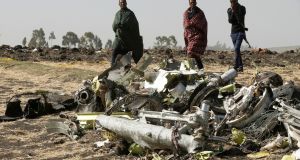 The pilots of Ethiopian Airlines Flight 302 “repeatedly” followed procedures recommended by Boeing before the crash, according to a preliminary report into the disaster.

Boeing had dismissed concerns about a powerful new anti-stall system on the 737 Max for months, insisting pilots could deal with any problems by following a checklist of emergency procedures.

Now, the preliminary findings from the crash of Ethiopian Airlines Flight 302 have cast doubt on whether those instructions were sufficient, adding to the scrutiny over Boeing’s and federal regulators’ response to two deadly crashes involving the same jet model.

The findings, released Thursday in Ethiopia, suggest the pilots on the Ethiopian Airlines flight initially followed the prescribed procedures after the anti-stall system malfunctioned. They shut off the electricity that allows the automated software to push the plane’s nose down and took manual control of the jet. They then tried to right the plane, with the captain telling his co-pilot three times to “pull up”.

But they could not regain control. About four minutes after the system initially activated, the aircraft hit the ground, killing all 157 people on board.

“The captain was not able to recover the aircraft with the procedures he was trained on and told by Boeing,” said Dennis Tajer, a spokesman for the American Airlines pilots union and a 737 pilot, who read the report.

The findings laid out a timeline of the March 10th flight based on analysis from 18 Ethiopian and international investigators and information from the jet’s flight data recorder and cockpit voice recorder.

Although the findings are not yet final, the initial evidence has raised new concerns about whether Boeing and federal regulators provided sufficient guidance for pilots. The report and other evidence suggest that Boeing’s procedures may not have worked well when a plane was flying at a high speed.

The pilots had a short window to react before going into an irrecoverable nose dive. Tests of the 737 Max have shown that once faulty data triggered the system, pilots had little time to save the aircraft.

The system, according to the investigators’ findings, appears to have forced the nose of the plane down several times in less than three minutes.

The new report, Mr Tajer said, suggests that Boeing may have underestimated the power of the new software, known as the maneuvering characteristics augmentation system, or MCAS.

“It was too aggressive,” he said. “They left the pilot with no ability to gain control of the aircraft if it went to the full limit.” – New York Times