Brexit fatigue unites voters in one of UK’s tightest constituencies 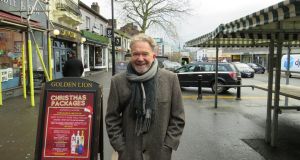 Michael Gilick: ‘If Brexit goes ahead, it will just divide people even more. And that frightens me.’ Photograph: Jennifer O’Connell 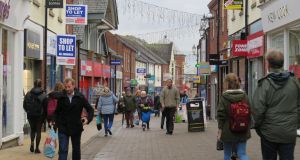 Shoppers out at lunch in Newcastle-Under-Lyme. Photograph: Jennifer O’Connell 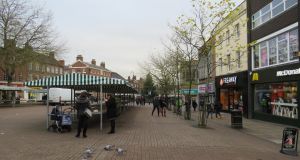 The market square in Newcastle-Under-Lyme. There was controversy over voter registrations in the constituency in 2017. Photograph: Jennifer O’Connell 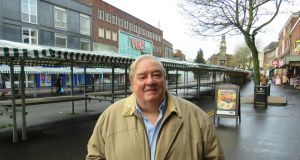 A Dutch television crew is setting up in the market square in Newcastle-under-Lyme, one of the UK’s most marginal constituencies, in the heart of the electorally volatile West Midlands. But they’re not here to make a programme about the upcoming election. “What’s happening with the election?” one of them asks.

They’re making a TV show about darts, he explains, because darts player Phil Taylor owns a pub here. The show involves asking people to throw darts at a dart board to see if they can hit the bullseye, which seems as a good an analogy as any for the final two weeks of campaigning in a general election.

There can’t be too many others in this borough of 130,000 who are unaware there’s an election happening – even if there does occasionally seem to be some confusion about what they’re being asked to vote on.

“Same as I voted last time. I’ll still vote Leave,” says Paul Lomas, who has popped out on his lunch break for some fish and chips.

Efforts by Labour to move the conversation here beyond Brexit are not proving entirely successful, admits the party’s candidate in the constituency, Carl Greatbatch, who is on the other side of the square, making a video of his own for social media. “Sixty-three per cent voted for Brexit here, so it is an issue on the doorstep. But fortunately, it’s not just about that. There’s a lot of talk about NHS cuts, local government cuts, police cuts.”

On Brexit, he says, “people have had enough of it. But even if Boris gets in and gets this vote through, that’s not the end of anything. It’s the start of everything.”

Labour leader Jeremy Corbyn’s neutral stance on the issue “is the only honest way forward. It’s not a culture war, despite how people are driving it as that,” he says, adding that the way forward lies in uniting people, “and having a conversation about what does Leave look like, and what does Remain look like”.

Greatbatch is not concerned by the impact of Corbyn’s performance in an interview with Andrew Neil on BBC television earlier in the week, which has been described as “so bad it redefined the genre”. “The reality is if you’re involved in politics, you can overstate the impact these things have. How many people actually watch it with attention?”

Despite his outward optimism, Greatbatch will be more aware than most that Labour needs to attract every spare vote in this constituency. The party has won here by a diminishing majority at each of the last six general elections. In 2017, his predecessor, Paul Farrelly, clung on to his seat of 18 years by just 30 votes. Farrelly, an ardent Remainer, has decided not to run again, making this seat a key target for the Conservatives, in a region – the West Midlands – often seen as a crucial stop on the road to Downing Street.

Every vote counts here on election day, Greatbatch agrees. “But nobody is clear on what the real outcome [of the last election] was. There was obviously an issue where a large number of students didn’t get to vote.” Greatbatch is referring to what happened here in 2017, when missing postal ballots and registration problems meant 1,500 people were unable to cast their ballots.

In H Cheadle and Son butcher shop, Neil Goode and Mark Anderson bring up the 2017 votes controversy, but they suggest it might have been the Labour MP Farrelly who benefitted. “Waste of Time Farrelly”, they call him, enraged over his opposition to Brexit. “I haven’t always voted Conservative, but I will now,” says Goode. So will Anderson. “Everybody is so fed up, they just want it all sorted. Even some of the Remains now are fed up of it.”

Back on the high street, Labour voter Michael Giliker is frustrated by how this has become the “Brexit election”.

“It’s the one thing which has politicised most people in the country. It’s good that everyone has a view,” he says, but he is unhappy that “the core issues we should be fighting for” have been overtaken by Brexit. He would like someone to come up with a “Go Compare” chart for political parties, so people could choose wisely, “just like you do your insurance”.

He is worried about the future beyond the election. “If Brexit goes ahead, it will just divide people even more. And that frightens me.”

NHS worker Pam Ayres, who is returning from her lunch break, is still undecided about how to vote. “Because of Emily Pankhurst [sic], I always vote. I wouldn’t want to waste one,” she says.

However, she’s taking a novel approach to deciding how to cast her vote in this ultra-marginal constituency. “Are you sure you want this on tape? I’m into the energies, and I go with how I feel on the day. I go down the village. I go into the booth. I get my pen, and I look, and I wait.”

The energies might already be offering a few hints, it seems. “I think we needed something to change the energy of what’s going on, and I think Boris might be strong enough to do that.”