Brexit: Shorter extension makes it difficult for FF or FG to call an election 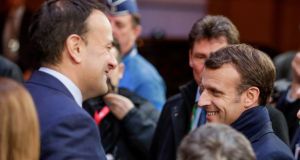 The first outcome of last night’s marathon European Council summit is the most important for Ireland: no crash-out Brexit tomorrow night.

And while it was always a remote possibility that the summit could be completely derailed and the UK would crash out, in the age of Brexit, the possibility of accidental catastrophes can never be entirely discounted.

But what the summit underlines is that both the EU and the UK— at least as presently led — take whatever steps are necessary to avoid a crash-out. That’s good news for Ireland.

The shortening of the proposed extension period is a less welcome outcome for Taoiseach Leo Varadkar and his ministers. Ireland favoured a longer extension and while six months is not short — the first extension was only a few weeks, remember — it significantly reduces the time and space available for political developments in Dublin and in London.

Perhaps it was the fatigue speaking, but there were few in the vast Justus lipsius building in the early hours of this morning who did not think there’s a fair chance we’ll all be back again in six months facing another extension. “Its a FUDGE!” Chortled one prominent British journalist in exasperation. “Foster,” said another.

The focus moves to Westminster today, as Theresa May begins yet another attempt to convince MPs to assent to the withdrawal agreement she struck with the EU late last year.

There is little enough optimism around that she can manage it; EU leaders were polite to her, but they weren’t convinced. Given what’s gone before, how could they be? Emerging bleary eyed after 2am, Taoiseach Leo Varadkar was asked if he believed she could do it. He said he hoped she could. Well, hope is the last thing to die, they say.

If the implications for Mrs May are obvious — the war drums of the Brexiteers were almost audible in Brussels last night — in Dublin they are more opaque for the other minority government of these islands.

A very long extension that effectively shelved Brexit for a period would have opened the door for a general election here. It’s a subject that is constantly discussed in Leinster house where many TDs judge Varadkar to be among the impatient and, more decisively, in Government Buildings.

Now, barring a significant breakthrough by Mrs May in the coming weeks that passes the treaty and clears the Brexit horizon, continued uncertainty seems the most likely outcome in the medium term.

That makes it very difficult for either Fine Gael or Fianna Fáil to jolt the country into a general election. They would be accused of huge irresponsibility — a fate both are desperate to avoid. “Good for the country,” says one of the Varadkar administrations election hawks. “Bad for the Government.”

Bad also for Irish MEP candidates, who must now prepare to fight for 11 seats, not 13. Quite what happens to the proposed extra two seats — due to be allocated to Ireland — will have to be finally worked out.

There is talk of parallel counts, one for the smaller number, one for the larger. The organisation of elections is a matter of national, not European competence. It’s messy, to be sure- though the fate of two would be MEPs is hardly the most pressing of Brexit issues.

The outcome is a messy — that word again — compromise, in the grand ( and sometimes not so grand) EU tradition.

EU unity was certainly under pressure last night and this morning. Has it really cracked, though? Ultimately, the EU agreed a compromise and will now stick to it. Ireland was protected, yes.

But in recent weeks there has been a sharp uptick in EU interest in Irish no deal preparations, especially on the Border. By the time the leaders meet again, these are likely to be a lot more advanced. The Irish Government will find it harder and harder to pretend there nothing to see here.

Something else significant happened last night too. There was a shift in the way things work, and power is exercised, in Europe’s most important decision-making body.

Emmanuel Macron, a politician who has made commitment to deepening integration in the EU central to his political mission and political appeal, flexed France’s considerable muscle. As the end of the Angela Merkel era looms, that seems likely to become a feature of these gatherings. With so much of the Macron agenda at odds with Ireland’s views, that is likely to mean things become more uncomfortable for Leo Varadkar and his successors.