Julian Assange could face up to five years in jail

WikiLeaks founder was arrested at Ecuadorian embassy in London on Thursday

WikiLeaks founder Julian Assange has been convicted by a London court of skipping bail in 2012 after an extradition order to Sweden over an allegation of rape. Video: BBC/UK parliament TV 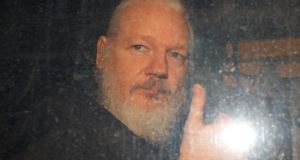 WikiLeaks founder Julian Assange is seen after was arrested by British police outside Westminster Magistrates Court in London on Thursday. Photograph: Peter Nicholls/Reuters

WikiLeaks founder Julian Assange could face up to five years in prison for conspiracy to hack a computer as part of the 2010 reams of secret American documents, according to the US justice department.

Police forcibly removed Mr Assange from the Ecuadorian embassy in London on Thursday and arrested him, after the Ecuadorian government withdrew asylum.

Appearing before Westminster magistrates, Mr Assange was found guilty of breaching bail and was told he would face a jail sentence of up to 12 months in the UK when he is sentenced at crown court.

In the US, Mr Assange faces conspiracy to commit computer intrusion. which stems from what prosecutors said was his agreement to break a password to a classified US government computer.

It carries a penalty of up to five years in prison and is significant in that it is not an espionage charge, a detail that will come as a relief to press freedom advocates. The US government had considered until at least last year charging him with an espionage-related offence.

Mr Assange, 47, has been living at the Ecuadorean Embassy in London since 2012. British authorities arrested him Thursday, heavily bearded and dishevelled. A dramatic video showed him shackled and being carried out of the embassy and forced into a police van. He was detained partly in connection with an American extradition warrant after he was evicted by the Ecuadoreans.

Assange has been in the sights of the US government since his organisation’s 2010 disclosures. Most recently, Assange has been under attack for his organisation’s release during the 2016 presidential campaign of thousands of emails stolen from the computer systems of the Democratic National Committee, leading to a series of revelations that embarrassed the party and Hillary Clinton’s campaign.

US investigators have said that the systems were hacked by Russian agents; the conspiracy charge against Assange unsealed Thursday is not related to the special counsel’s investigation into Russia’s election influence.

In 2010, WikiLeaks released US files that documented the killing of civilians and journalists and the abuse of detainees by forces of the United States and other countries, airing officials’ unvarnished, often unflattering views of allies and of American actions.

An army private, Bradley Manning – now known as Chelsea Manning – was convicted of leaking that collection of files and was sentenced to 35 years in prison. Former US president Barack Obama commuted the sentence after Manning had served almost seven years.

US prosecutors said that in March 2010 Mr Assange agreed to help Manning crack a password on a US defence department computer to reach restricted classified government documents and communications.

“Since 2010 we’ve warned that Julian Assange would face extradition to the US for his publishing activities. Unfortunately, today we have been proved right.”

She said they had received a provisional extradition request “alleging that he had conspired with Chelsea Manning over materials that were published by WikiLeaks in 2010”.

She said Assange thanked his supporters and had said: “I told you so.” - Guardian/New York Times