Netherlands ruling on repatriating jihadists’ children to be appealed 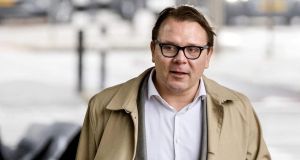 Dutch lawyer Andre Seebregts arrives at the courthouse in The Hague, on November 1st, 2019, to assist 23 women who are blocked at a refugee camp in northern Syria. Photograph: Koen Van Weel/ANP/AFP

In an indication of the quandary facing many EU countries, the Dutch government has said it will appeal against a court ruling that it must make “all possible efforts” to repatriate the children of Islamic State jihadists held in detention camps in northern Syria.

A court in The Hague ruled that the state must bring home children under the age of 12 with Dutch nationality – but said it was not obliged to do the same for their mothers who went there specifically to support Islamic State, also known as Isis, and other armed groups.

In a case taken on behalf of 23 female Dutch jihadists and their children who are among roughly 68,000 inmates of the notorious al-Hol camp, the presiding judge said it was a case in which “the children are undoubtedly the victims of their parents”.

“However, those children cannot be held responsible for their parents’ actions, no matter how serious those actions may be”, said Judge Hans Vetter. “The mothers were aware of the crimes being committed by [Isis] and must at some point be tried for them.”

The courtroom was packed with the families of the militants who have been campaigning for their return on the grounds that conditions in al-Hol are so dangerous in physical terms and inhuman in terms of quality of life as to violate international human rights treaties.

An estimated 55 Dutch adults and about 90 children are being held in Syrian camps, including al-Hol, according to figures issued last month by the Netherlands’ security service, AIVD. Most of the children are younger than six.

Prime minister Mark Rutte promised to study the court’s judgment closely, although he is under severe pressure from two of his coalition parties, his own Liberals and the Christian Democrats, both of whom vehemently oppose repatriation.

As a result, on Tuesday, both the foreign affairs and justice ministries issued statements saying the ruling would be appealed “as quickly as possible” with a view to overturning it because it did not take diplomatic considerations into account.

The government has repeatedly said it believes it is not safe to send staff to the camps to find the children and negotiate their safe passage to Turkey. And the ruling poses additional difficulties because the Syrian Kurds who control al-Hol are opposed in principle to separating children from their mothers.

However, the children’s ombudsman, Margrite Kalverboer, has also entered the fray, saying there is a moral obligation to repatriate the children: “The development of these children is being seriously threatened by their parents’ choices. If their parents cannot protect them, the state must step in.”

She has been supported by the Refugee Council and children’s rights organisations.

The Dutch domestic row came as Turkey said it had deported two Islamic State captives – an American and a German – at the start of a programme to repatriate foreign detainees even if their citizenship has been revoked.

More deportations are due to follow in the next few days – to Ireland, Germany, Denmark and France.