CCTV footage has captured a rocket, fired from Gaza in response to the killing of militant leader Baha Abu al-Ata, hitting a busy highway near the Israeli city of Ashdod. Video: Netivei Israel 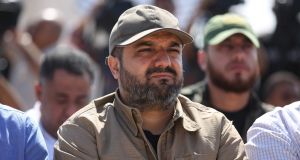 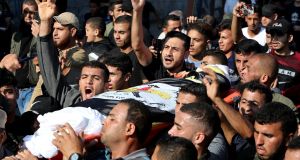 Mourners carry the body of Baha Abu Al-Atta during his funeral in Gaza City on Tuesday. Photograph: Mohammed Salem/Reuters 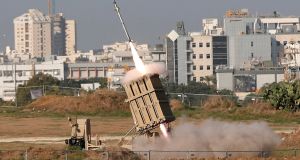 A view of an Iron dome missile system intercepting rockets reportedly fired from Gaza into Israel, near the city of Ashdod on Tuesday. Photograph: Atef Safadi/EPA

Israel and Gaza militants are locked in another round of deadly violence after Israel killed a senior militant commander in a surprise, pre-dawn air strike on Tuesday morning, renewing its policy of targeted assassinations.

The Islamic Jihad commander in the northern Gaza Strip, Baha Abu al-Ata, was killed along with his wife when a rocket slammed into the bedroom of their Gaza city home.

Shortly after the Gaza attack a building in the Syrian capital Damascus was hit with rockets. The target was Akram al-Ajouri, al-Ata’s primary contact with the Iranian-backed Islamic Jihad leadership abroad. Mr al-Ajouri survived the attack although his son and another Islamic Jihad operative were killed.

Israel’s prime minister Binyamin Netanyahu described al-Ata as a “ticking bomb” responsible for the firing of many rockets at Israel and claimed he was planning to carry out fresh attacks in the near future.

Minutes after the Gaza attack, Islamic Jihad fired rockets into Israel and by Tuesday night 200 projectiles had been launched from Gaza, including at Tel Aviv, prompting waves of Israeli air strikes against targets across Gaza.

Islamic Jihad’s leader in Gaza, Khaled al-Batsh, said nothing would prevent the militants from responding. “We will not allow Israel to change the rules of our military conflict. We have no choice but confrontation,” he said.

At least five Palestinians were killed and dozens injured as Israel concentrated on Islamic Jihad targets, hoping that Hamas would not join the fray.

While stressing that Israel does not seek escalation, Mr Netanyahu warned that the latest flare-up may “take some time”.

second Gaza war in 2014. Such a scenario would almost inevitably lead to a more aggressive Israeli response and with it the danger of a wider conflagration.

Much may depend on Hamas, the Islamic group that rules Gaza. Hamas has been embarrassed by the regular infringements by Islamic Jihad of the truce with Israel over recent months, suspecting its intermittent rocket fire may be an attempt to undermine the Hamas leadership.

Hundreds of thousands of Israelis took refuge in bomb shelters on Tuesday and 50 required medical treatment. Hundreds of families left their homes in communities close to Gaza to the relative safety of family and friends further north, outside the militant rocket range.

Benny Gantz, the leader of the centrist Blue and White party, has another week to form a government after Binyamin Netanyahu tried and failed to cobble together a working coalition following the inconclusive September election. Some politicians on the left accused Mr Netanyahu of timing the latest escalation in order to torpedo efforts by Mr Gantz to form a minority government without Mr Netanyahu’s Likud.

Commentators speculated that the military emergency will increase the chances of a national unity government being formed.