Moldova warned of ‘severe consequences’ by EU after ousting of government 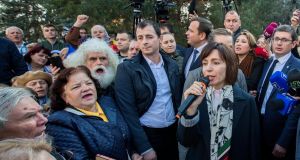 Prime minister of Moldova Maia Sandu speaks in front of parliament in Chisinau. Her government lost a vote of non-confidence. Photograph: Dumitru Doru/EPA

The EU has warned Moldova of potentially “severe consequences” for its relationship with the bloc after its parliament ousted a strongly pro-reform government just five months after it took power.

A majority of deputies voted to remove prime minister Maia Sandu’s cabinet on Tuesday in a row over her bid to change how the country’s prosecutor general was chosen, which triggered the collapse of her Acum party’s fragile coalition with the pro-Russian Socialists of Moldovan president Igor Dodon.

Acum and the Socialists formed an unlikely alliance in June, with the support of the EU, US and Moscow, to replace a government led by the scandal-plagued Democrats of Moldova’s richest oligarch Vlad Plahotniuc.

Ms Sandu, a former education minister whose reputation for probity is rare in Moldova’s murky politics, pledged to fight rampant corruption in one of Europe’s poorest countries and track down $1 billion that was stolen from its banks in 2013-14.

She made a priority of overhauling Moldova’s discredited criminal justice system, but when she sought a greater role in the selection process for a new prosecutor general the Socialists tabled a no-confidence motion with Mr Dodon’s support.

Democrats and Socialists alike voted to dismiss the government in a move that Ms Sandu and her allies said showed that both parties opposed efforts to root out graft and free prosecutors and courts from political influence.

“You are such cowards that you cannot admit the real reason why you are voting against this government, which is that you are afraid of real justice. Today you have not only betrayed a government that defends the interests of the people, but you have betrayed every citizen.”

EU enlargement commissioner Johannes Hahn wrote on social media that he was “deeply worried” by the bid to oust Ms Sandu.

“Any change to her resolute action to reform the country over the last five months would have severe consequences on EU support. Moldovan citizens deserve independent justice and a corruption-free country!” he tweeted.

Mr Dodon, a regular visitor to the Kremlin who favours closer ties with Russia over deeper EU integration, said he was ready to meet with representatives of Acum and the Socialists on Wednesday to discuss forming a new government.

He accused Ms Sandu of provoking a crisis due to “irresponsibility, personal ambitions and immaturity”, but insisted that the two parties could continue to co-operate in a new government that would also pursue key reforms.

“This crisis could have been avoided if they had discussed their [legislative] initiative with the Socialists and the president,” he added.

1 Why Sinn Féin will not call the State by its name
2 Europe grapples to rein in global spread of coronavirus
3 McDonald rejects idea SF public meetings ‘an affront to democracy’
4 Coronavirus: Irish citizens advised not to travel to Italy’s affected areas
5 Maureen Dowd: For the White House parasite, all restraint has gone
Real news has value SUBSCRIBE