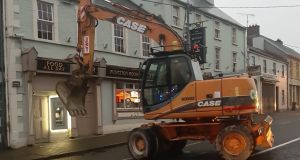 An attempted ATM robbery in Virginia, Co Cavan: the ability to fight all-island crime such as the recent wave of ATM robberies could be affected by a no-deal Brexit. Photograph: Garda Press Office

A no-deal Brexit will deprive police, north and south of the Border, of EU tools to fight all-island crime such as the recent wave of ATM robberies, a new report has found.

The study, by three academics for a north-south committee set up to monitor human rights under the 1998 Belfast Agreement, warns that the UK crashing out of the EU without a deal could cause considerable disruption to extradition arrangements on the island of Ireland and between the State and the UK.

The report, entitled Evolving Justice Arrangements Post-Brexit, presents a series of disruptions and complications to existing justice and security arrangements that would affect continued policing and law enforcement on the island of Ireland should the UK crash out of the EU at the end of October.

“Given the necessity of maintaining a high-level of policing co-operation due to the 310-mile land Border and the specific post-conflict realities on the island, any disruption to police co-operation could have serious consequences,” the three Northern Irish and Scottish-based law academics caution in the study.

Should the UK leave the EU without any arrangements in place, London would have to rely on the 1957 Council of Europe Convention on Extradition, instead of the more efficient European Arrest Warrant (EAW), “which would cause considerable disruption and delay to extradition arrangements”, the report says.

The study notes that former British prime minister Theresa May was highly critical when she was UK home secretary in 2014 of relying on the convention for extradition.

The report is being published just days after two men in their 40s were arrested by An Garda Síochána in Dublin in connection with the discovery of a bomb found underneath a police officer’s car in east Belfast.

The authors noted that EU policing tools “have been central” to co-operation between the Garda and the Police Service of Northern Ireland (PSNI) in the spate of ATM robberies north and south of the Border this year.

“If the UK leaves the EU, it will lose access to a lot of these tools and databases that facilitate sharing and co-operation between AGS [An Garda Síochána] and the PSNI,” says the study.

The PSNI would, after Brexit, lose access to tools “that will likely have growing importance given the globalised nature of organised crime”, the academics say.

Existing arrangements, which prevent police crossing the Border in “hot pursuit” of a suspect, have led to more than 47 police chases ending at the Border, the report says.

The study was written for the Joint Committee of the Irish Human Rights and Equality Commission and the Northern Ireland Human Rights Commission, which considers human rights issues on the island of Ireland under the terms of the 1998 agreement underpinning the peace process.

Losing the EAW after Brexit will deprive the PSNI of a system that has cut average extradition times to 48 days and decreased four-fold the cost of extradition since 2004.

“It is quite clear that losing the European Arrest Warrant is going to be a problem. The alternative arrangements will take longer, will be more clunky and will probably be more likely to face legal challenge,” said Les Allamby, chief commissioner of the Northern Ireland Human Rights Commission.

“If the UK leaves without a deal, it will have to negotiate individual arrangements with the other 27 member states, which is not an attractive prospect at short notice. It looks like they have done some groundwork on this behind the scenes. Whether this will move all seamlessly on November 1st, I have very major doubts.”

The report warns that negotiating individual extradition arrangements with each EU member state post-Brexit would be a “cumbersome and costly alternative” for the UK government.

The authors – Dr Amanda Kramer of Queen’s University Belfast, Dr Rachael Dickson of the University of Strathclyde and Dr Anni Pues of the University of Glasgow – say the “most desirable arrangement” for the UK is to retain access to the EAW to “ensure seamless continuation of law-enforcement activities.”

They warn that “no precedent exists” for third-country membership to the EAW system and that, alternatively, the UK could seek to negotiate a new arrangement with the EU as a whole.