Thousands of people have protested across major Russian cities at proposals to raise the retirement age from 60 to 65 for men and 55 to 60 for women. Video: Reuters 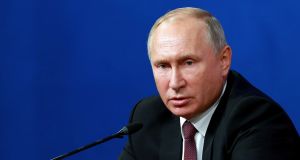 Police detained almost 300 people across Russia during protests against government plans to raise the national retirement age that have resulted in Vladimir Putin’s approval ratings slumping to a four-year low. Thousands of protesters took to the streets on Sunday in dozens of towns and cities after Alexei Navalny, the Kremlin critic, called for nationwide rallies against the pension reforms. Mr Navalny was jailed for 30 days on August 25th on a separate protest-related charge in a move that he said was aimed at preventing him from leading the rallies on Sunday.

In Moscow, where protesters gathered on the city’s iconic Pushkin Square, about 2,500 people ignored police warnings to disperse. They chanted “Putin is a thief!” and “No increase in the pension age!” Although the demonstration was largely peaceful, violence erupted when some protesters tried to march towards parliament, where they were beaten back by police with truncheons.

The protests came as Moscow held mayoral elections that the Kremlin-backed incumbent, Sergei Sobyanin, was expected to win easily. Critics accused officials of barring genuine opposition candidates. Russians also went to the polls in regional elections. Authorities did not give permission for the vast majority of the protests and some Russians said they had stayed away because they feared arrest. Dozens of members of Mr Navalny’s opposition movement were detained before the events on charges of organising illegal rallies.

Earlier, Mr Navalny’s aides condemned Google after it removed his adverts from YouTube urging Russians to protest against the pension changes. Russian officials sent a letter to Google last month asking it to block Mr Navalny’s videos because it said they were illegal under the country’s election laws, which bar political campaigning 24 hours before elections.

Google confirmed it had pulled the videos. “We consider all justified appeals from state bodies. We also require advertisers to act in accordance with the local law and our advertising policies,” the company told the Guardian. Leonid Volkov, an aide to Mt Navalny, said Google’s decision “presents a clear case of political censorship”. He said it was the first time the internet firm had complied with a request by Russian authorities to block opposition content. He also accused officials of misleading Google: “The rallies do not have anything to do with the elections.”