Blow for Bolsonaro as candidates he backed fare badly 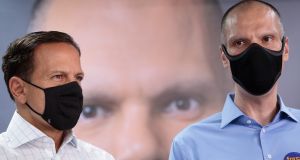 Sao Paulo governor Joao Doria and mayor Bruno Covas: The most significant defeat on the night for the president was in the race for mayor of the biggest city in South America. Photograph: Patricia Monteiro

Brazil’s president Jair Bolsonaro has suffered a political setback after a string of candidates he backed in local elections performed poorly.

The far-right leader was reduced to deleting a post on his Facebook account which had instructed his followers who to vote for in several key races in Sunday’s polls when it became clear they would trail behind frontrunners.

In a sign that the anti-establishment wave the president surfed to power in 2018 has receded, his son Carlos Bolsonaro saw his vote for the city council of Rio de Janeiro drop by 34 percentage points compared to four years ago, though he was returned to the chamber.

Carlos is one of three members of the Bolsonaro clan, along with his senator brother Flávio and their father, currently under investigation for corruption. Despite its backing for her campaign, the family also failed to elect the woman who was employed as a member of Mr Bolsonaro’s congressional staff before he became president, despite no evidence she ever worked in Brasília.

Wal do Açai, now known as Wal Bolsonaro, is being investigated as a potential phantom employee whose public salary was pocketed by the Bolsonaro family. With the family’s backing she ran for the city council of the Rio resort town of Angra dos Reis but received only 266 votes and failed to get elected.

The most significant defeat on the night for the president was in the race for mayor of São Paulo, the biggest city in South America. There Mr Bolsonaro had supported Celso Russomanno, who held an early lead in the race. But he started to slide in the polls once his campaign highlighted the president’s backing and he finished a distant fourth.

In Rio incumbent mayor Marcelo Crivella did manage to limp into a run-off round with the president’s support. But he has little chance of closing the 15-point gap on frontrunner, former mayor Eduardo Paes.

The big winners across the country were the traditional right and centre-right parties that had been blindsided by the anti-establishment wave in 2018’s general election, which for the first time saw the emergence of the hard right as a major political force in Brazilian electoral politics.

As well as Mr Bolsonaro, the other notable loser on the night was the Workers Party of former president Lula. It failed to recover ground after its catastrophic showing four years ago at the height of the Car Wash corruption scandal.

Instead the left-wing group that made a breakthrough was the Socialism and Liberty Party. Founded by members expelled from the Workers Party in 2003, it is set to be one of several parties that will now dispute leadership of the Brazilian left once dominated by Lula.

Just days after Mr Bolsonaro called into question the vulnerability of Brazil’s highly regarded electronic voting system, Sunday’s count was disrupted by what authorities said was a co-ordinated operation whose objective was to discredit electoral authorities.