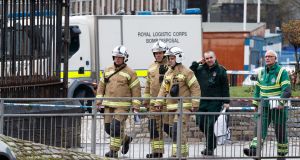 Police, Fire and Rescue and Bomb disposal teams investigate a suspicious package reported to be in the Glasgow University mailroom, in Glasgow on Wednesday. Photograph. Robert Perry/EPA

Scottish police have carried out a controlled explosion on a parcel sent to the University of Glasgow on Wednesday, and said they were linking it to three devices sent to major transport hubs in London the day before.

“Due to similarities in the package, its markings and the type of device that was recovered in Glasgow, we are treating it as being linked to the three packages we’re investigating in London,” said Commander Clarke Jarrett from London’s Counter Terrorism Command.

“We are working very closely with our colleagues from Police Scotland and both investigations are being run in tandem.”

Assistant Chief Constable Steve Johnson said the package setn to the University of Glasgow was not opened, no one was hurt, and there was no risk to the public.

One device caught fire when opened but they did not injure anyone and services continued at all three hubs.

Dean Haydon, Britain’s senior national co-ordinator for counter-terrorism policing, said the London devices were small and not intended to kill but would have required some specialist knowledge to build.

The packages that arrived at the London transport hubs on Tuesday were posted with Irish stamps and had Dublin as the return address.

Security sources suggested the packages’ Irish insignia may have been a “concerted attempt” to make them appear as though they were posted from Ireland, but could not rule out that they had been.

Mr Haydon said no message appeared to be contained within the packages, no sender had been identified, and no group had claimed responsibility.

“We are talking to our Irish counterparts but at the moment there’s nothing to indicate motivation of the sender or ideology, so I cannot confirm at the moment if it’s connected to any Ireland-related terrorist groups,” he said.

Asked earlier whether there could be more packages, he replied: “They were sent through the postal system so we are not ruling that out.

In a bid to identify a suspect, Mr Haydon said, forensic teams are scouring the packages for DNA and fingerprints.

Police to the east of London said they had sent for the bomb squad after a suspicious package was sent to the University of Essex, prompting them to evacuate some buildings and put a cordon in place. They later said the package posed no risk. A suspicious parcel outside an entrance to parliament in London also caused a scare until police deemed it harmless.

The first report of a suspicious package came from The Compass Centre, a building near Heathrow Airport’s boundary, shortly before 10am on Tuesday. Scotland Yard said the package was opened by staff, causing the device to ignite and partially-burn the packaging.

British Transport Police were later called to a suspicious package in the post room at Waterloo station at 11.40am. The package was not opened and the device was secured. Shortly after midday, police were also called to a report of a suspicious package at Aviation House at London City Airport. The package was not opened, the building was evacuated and specialist officers made the device safe. - Reuters and PA