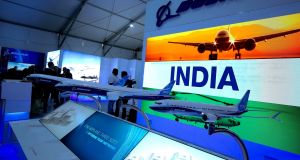 Indian politicians have reacted adversely to a government directive instructing all cabin crew of the country’s national airline to forcefully conclude their in-flight announcements with the patriotic slogan “Jai Hind”, or “Victory to India”.

“Little surprised that with general elections around the corner, the josh (zeal) of patriotism hasn’t even spared the skies,” former Kashmir chief minister Mehbooba Mufti tweeted on Wednesday.

She was responding to a fiat by the operational directorate of the state-owned Air India airline instructing in-flight attendants to “announce Jai Hind at the end of every announcement, after a slight pause and with much fervour”.

This decree prompted sardonic tweets from people asking whether jingoistic and patriotic slogans would rescue the flagging fortunes of the airline, which has not returned a profit since 2007. With debts of more than €3.5 billion, Air India periodically receives government subsidies to keep it afloat. Attempts by the government to sell the airline last year failed.

Flight attendands One Twitter user asked if its flight attendants would be required to announce: “Please do not use the toilets now, Jai Hind”.

Prime minister Narendra Modi’s Hindu nationalist Bharatiya Janata Party (BJP) popularised the largely dormant Jai Hind slogan, after it was elected to federal power in May 2014. The BJP is the frontrunner in general elections that are due to be held before the end of May, and is again contesting the polls on a nationalistic agenda.

Senior government officials in New Delhi privately conceded that the edict to Air India regarding the patriotic slogan was part of the BJP’s agenda of “furthering” the countrywide nationalistic mood after India launched air strikes last month against an alleged Islamist training camp inside Pakistan.

This was in retaliation to the Pakistan-based Jaish-e-Mohammad group claiming responsibility for killing 40 Indian paramilitary police in India’s northern disputed Kashmir province, which is divided between the neighbours but claimed in its entirety by both.

The aerial attack led to a skirmish between India and Pakistani fighters, the neighbours’ first dogfight since 1971, when they fought the third of four wars since independence 72 years ago. It also led to the shooting down and capture of an Indian pilot who was repatriated to India last Friday, after 48 hours in Pakistani captivity.

Demanding a ban Nationalistic fervour is breaking out

across India, with many people demanding a ban on Pakistan’s participation in the Cricket World Cup in England this year.

Successive Indian governments have blamed Pakistan for supporting the 30-year old Kashmiri insurgency, which has claimed more than 73,000 lives. Pakistan denies these claims, saying it supports the armed Kashmiri movement only morally, diplomatically and politically.

In 2016 the airline’s chairman, Ashwani Lohani, issued a similar directive to pilots, calling on all flight captains to “connect with passengers” and advising that using the words Jai Hind “would make a tremendous impact”.