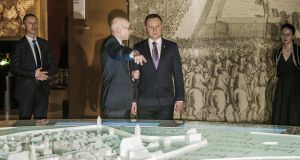 President of Poland Andrzej Duda and director of the Polin Dariusz Stola: the national conservative Law and Justice government has complained the museum is too political. Photograph: Celestino Arce/NurPhoto

Six years after it opened, Warsaw’s award-winning Jewish museum finds itself caught in a widening row over political history in Poland – and citizens’ complicity in the Holocaust.

The “Polin” museum is a modern, light-filled complex built on the site of the former ghetto that held the city’s Jewish population during the Nazi occupation. The ghetto was razed after its population was deported and murdered. Since 2013, the museum has returned the history of Polish Jews – the largest in pre-war Europe – to the landscape of the capital, and the memories of Poles and foreign visitors alike.

But the future of museum director Dariusz Stola is in doubt after the national conservative Law and Justice (PiS) government complained his museum had become too political.

More Poles than any other people are honoured as “righteous among the nations”, for rescuing Jews, at the Yad Vashem memorial to the Holocaust in Jerusalem. But new research, in part presented at Polin, presents a more complex, and troubling, picture.

Last year the museum launched a book claiming many of the 250,000 Polish Jews who went into hiding from the Gestapo, the SS, deportation and death were betrayed by ordinary Poles.

A second, two-volume research study, based on court records, came to similar conclusions. Among the reasons for the widespread collaboration, the researchers say, was a deep-rooted tradition of anti-Semitism in Poland that chimed with official Nazi doctrine.

Such claims are a challenge to the heroes-and-victims narrative of recent Polish history, prompting emotional debate, and a robust response from the PiS, the party in power since 2015.

It has already moved against a second World War museum in Gdansk, reconfiguring the exhibition for greater emphasis on Polish suffering while expunging references to current world conflicts, in particular those contributing to mass immigration into Europe.

Meanwhile Gdansk’s Solidarity museum, exploring the movement that triggered the peaceful revolution of 1989, has seen massive government budget cuts after the PiS criticised its education and research programmes.

Fears of political pressure surround a new museum about the Warsaw Ghetto, after Poland’s cultural minister promised an exhibition highlighting the “mutual love” between Poles and Jews.

The Polin museum in Warsaw began to feel pressure after a temporary exhibition a year ago about communist Poland’s anti-Semitic campaign of 1968, which saw about 15,000 surviving Jews in Poland fleeing into exile.

Over 100,000 people saw the temporary exhibition, for which the government refused to supply additional funding.

Around the same time, a diplomatic row was building between Warsaw and Jerusalem, over legislation outlawing claims that the Polish nation or state were complicit in the Holocaust.

The government said the law took a stand against a common mistake, insulting to many Poles, of referring to the Nazi concentration camps in the occupied country as “Polish”.

But the law attracted concerns, particularly in Israel, that it would outlaw discourse about the occupation, and the role of ordinary Poles, in the Holocaust.

After settling the row last June, Israel’s prime minister Binyamin Netanyahu stirred it up again during a recent visit when he was quoted as saying “the Poles” collaborated with the Nazis. The prime minister’s office insisted he had been misquoted, and was referring to collaboration by “Poles”, meaning individuals and not the entire population.

After summoning the Israeli ambassador twice in two days, the Polish government pulled out of a planned meeting in Israel of the so-called Visegrad countries: Poland, Czech Republic, Hungary and Slovakia.

“Many Poles collaborated with the Nazis and took part in the destruction of the Jews during the Holocaust,” he said. “Anti-Semitism was innate among the Poles before the Holocaust, during it and after it, too.”

The Polin museum director job has been advertised publicly after the museum’s three founders were unable to agree on whether renew the contract of Mr Stola. He is anxious to stay on but, of the three founders, the PiS-controlled culture ministry is opposed.