BBC coverage of raid an ‘invasion of Cliff Richard’s privacy’ 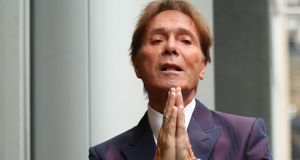 Sir Cliff Richard arrives at the Rolls Building in London, as a High Court judge is preparing to analyse evidence in his legal battle with the BBC. Photograph: Yui Mok/PA Wire

Sir Cliff Richard’s lawyers have told a High Court judge that BBC coverage of a raid on the singer’s home was a “very serious invasion” of privacy, and complained of television cameras being used to “spy” into someone’s home.

The 77-year-old singer is suing the broadcaster over coverage of officers swooping on his apartment in Sunningdale, Berkshire, in August 2014 following an allegation of sexual assault.

Richard who denied wrongdoing and was not charged with any offence, said he suffered “profound and long-lasting damage” as a result of the coverage and wants damages.

BBC editors have said they will “defend ourselves vigorously”.

A judge, Mr Justice Mann, on Thursday began overseeing a trial at the High Court in London, which is due to last 10 days.

“In a nutshell, it is Sir Cliff’s case that the BBC’s coverage of the search was an invasion - indeed a very serious invasion - of his privacy, for which there was no lawful justification,” barrister Justin Rushbrooke QC, who is leading Richard’s legal team, told the judge in a written statement.

“It is hard to encapsulate in words the sense of panic and powerlessness that must have been induced in him on 14 August 2014 when he realised that the BBC were relaying instantaneously and indiscriminately around the world highly sensitive and damaging information concerning himself - all based upon an allegation of serious criminal conduct which he knew to be entirely false.”

He told the judge: “What we are talking about is using TV cameras to spy into someone’s home at the time when their target is in the most vulnerable position imaginable, and then serve it up to the British public as the most sensational story imaginable.”

Mr Rushbrooke said his client had been left with “no option” but to take legal action.

Detail of the case has emerged at preliminary hearings.

Lawyers have told Mr Justice Mann that, in late 2013, a man made an allegation to the Metropolitan Police, saying he had been sexually assaulted by the singer at Sheffield United’s Bramall Lane football stadium in Sheffield when a child in 1985.

Richard denied the allegation and in June 2016 prosecutors announced that he would face no charges.

A BBC spokesman has said the broadcaster had reported the “full denial of the allegations at every stage”.

Richard had also sued South Yorkshire Police. Mr Justice Mann has been told that that dispute was settled after the force agreed to pay the singer “substantial” damages. - PA