US House Speaker Paul Ryan, the top Republican in Congress, will retire in January to spend more time with his family. 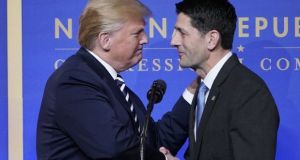 US House speaker Paul Ryan has said he will not run for re-election in November, in a move that will heighten anxiety among Republicans about the party’s prospects in the midterm elections.

The decision will unleash a succession battle within the Republican Party, with Kevin McCarthy, the House majority leader, and Steve Scalise, the majority whip, seen as the most likely contenders for the post.

In a press conference, Mr Ryan insisted he would serve out his time as speaker, adding that he was leaving the House because he wanted to spend more time with his family. “I will be retiring in January, leaving this majority in good hands with what I believe is a bright future,” he said.

The Republicans view the November elections with deep trepidation, with many analysts predicting the House could fall to the Democrats. Dozens of Republicans have already announced they are not seeking re-election as analysts predict a wave of Democratic support aided by the unpopularity of President Donald Trump.

Among the latest to decide against running again in the House is Dennis Ross, a Florida Republican, who announced his intentions on Wednesday morning.

“If you are fighting the toughest war in years and your general retires that is not a good sign,” said Larry Sabato, a professor of politics at the University of Virginia. The move was likely to be interpreted as an acknowledgment that the Republicans are on course to lose the House, he added.

Speaker Paul Ryan is a truly good man, and while he will not be seeking re-election, he will leave a legacy of achievement that nobody can question. We are with you Paul!

The jockeying to succeed Mr Ryan at the helm of the House Republicans will probably start immediately, with his departure opening the door to a more Trump-friendly leadership in the chamber. Both Mr McCarthy and Mr Scalise are seen as having stronger relationships with the president.

Mr Ryan initially declined to endorse Mr Trump’s candidacy during the 2016 race. While they joined forces to push through a major tax-cutting bill in late 2017, the two men were never close. Just last month, Mr Trump publicly toyed with the idea of vetoing a major spending bill brokered by the two parties on Capitol Hill, before ultimately signing the legislation.

Responding to Mr Ryan’s announcement, Mr Trump said the speaker was a “truly good man” who left “a legacy of achievement that nobody can question”.

There has been speculation for months that Mr Ryan might step down, but the timing of his decision came as a surprise. Some politicians had expected Mr Ryan to resign after clinching re-election to his Wisconsin seat, but the speaker insisted it would not have been honest to run in the knowledge that he did not intend to serve out his term.

Mr Ryan’s decision leaves a closer race for his district, with analysts at the Cook Political Report shifting the seat from solid Republican to “lean” Republican. The speaker played down the likely impact of his departure on the November elections, saying whether or not he stayed in 2019 was not going to affect an individual race for Congress.

Mr Ryan was the running mate to former Republican presidential candidate Mitt Romney in 2012, before agreeing to serve as speaker in 2015 following the decision of his predecessor, John Boehner, to quit. Mr Ryan stressed in his press conference that while he had been reluctant to serve in the post, he had accomplished much of what he had sought to do.

Chuck Schumer, the top Democrat in the Senate, urged Mr Ryan to now use his “new-found political freedom” to break free of the right wing in the House and work with the Democrats. But the speaker’s announcement cements the impression that major legislative moves are unlikely before the elections.

Mr Ryan forged his reputation as a deficit hawk, but he will leave with America’s public finances in an increasingly parlous state following the $1.5 trillion tax cut and subsequent spending Bill. The Congressional Budget Office this week forecast a return to trillion-dollar annual deficits in 2020, with America’s public debt headed towards 100 per cent of gross domestic product in the next decade.

Asked about the deficit outlook, Mr Ryan emphasised that he intended to continue working on “entitlement reform”, in a reference to massive programmes including healthcare and social security. – Copyright The Financial Times Limited 2018