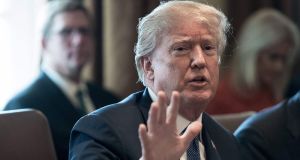 US president Donald Trump said ‘major decisions’ would be made on a Syria response in the next day or two. Photograph: AFP

After pictures of dead bodies and wounded children hooked up to respirators in the besieged Syrian town of Douma went viral, Russia was thrust into the centre of international anger over a suspected chemical weapons attack.

Now, as the world awaits US president Donald Trump’s response, Russian officials and analysts warn that any American retaliatory air strikes in Syria risks triggering a military confrontation between Russia and the US as relations between the countries hit new lows.

Andrei Kortunov, head of the Russian International Affairs Council, a state-backed think tank, said an escalation of tension between Russia and the West on a broad front over the past month had sharply increased the risk of a clash that, in the worst-case scenario, raises the spectre of wider conflict.

“I don’t want to sound apocalyptic – we are not there yet. But we are moving in that direction,” he said.

Such doomsday predictions are not coming out of the blue. Russia’s foreign ministry set the tone on Sunday with a sharply worded statement that claimed that the information about the suspected attack on Sunday in Douma was a lie created as a pretext for US military action against the government of Syria’s president Bashar al-Assad.

“We recently warned of the possibility of such dangerous provocations,” the statement said. “We have to say once again that military interference in Syria, where Russian forces have been deployed at the request of the legitimate government, under contrived and false pretexts, is absolutely unacceptable and can lead to very grave consequences.”

General Valery Gerasimov, chief of the general staff of the Russian armed forces, warned last month that Russia would strike back against the US if Washington targeted government-controlled territory in Syria.

Trump said on Monday that the US will make a decision in 24-48 hours on whether to launch an assault on Syria in response to the suspected Douma attack.

He has already set a precedent for striking after a chemical attack: US forces fired 59 cruise missiles at a Syria air base a year ago after a gas attack in Khan Sheikhoun killed more than 80 people. Moscow criticised those US strikes, but refrained from a military response.

Russian security experts now say that relations with western governments have deteriorated so much over the past 12 months that the constraint which Moscow practised then had disappeared.

A retired army general said the US had done “immense damage” by expelling 60 Russian diplomats and closing a Russian consulate-general in solidarity with the UK over the poisoning in Britain of Sergei Skripal, a former Soviet double agent, and his daughter. “They sent a clear signal that they are not in the mood for improving relations,” he said.

Washington further enraged Moscow on Friday by imposing US sanctions on seven oligarchs and 14 companies, adding to the perception that Washington was angling for all-out confrontation with Moscow.

Russian analysts said the replacement of Rex Tillerson, US secretary of state, with Mike Pompeo and the arrival of John Bolton, both foreign policy hawks, in the administration had strengthened those in the Russian leadership who were sceptical of engagement with Washington.

Kortunov said if the US was to target a Syrian air base with cruise missiles, Russian forces shooting down some with missile defence systems would be “a relatively minor response” from Moscow.

“If they want to go further, they [Russia] could take an aircraft down. The worst-case scenario would be if there’s kind of massive military action from the US side with Russian casualties. Then, Russia can sink an aircraft carrier,” he said.

Frederic Hof, Syria expert at the Atlantic Council, said the Trump administration is likely to be considering a targeted military strike or a range of assaults in order to deter the use of chemical weapons.

“If the objective is some combination of upholding America’s credibility – defending the integrity of yet another red line – and signalling to Assad that there is a price to be paid if you continue to indulge in mass homicide, then I would imagine the administration is giving very, very serious consideration to a strike or series of strikes,” he said.

But Hof, former special adviser on Syria during the Obama administration, warned of the risk of escalation. He cautioned that limited strikes were unlikely to change the trajectory of the seven-year war in Syria, where Russia’s military intervention has tipped the conflict in Assad’s favour.

“It’s a tough decision for the administration,” he said. “I think the likelihood of armed conflict between the US and Russia is extraordinarily low, but I would not rule out a ratcheting up of the esclatatory chain in Syria,” he said. “The Russians certainly have the option of deciding to confront the US directly.” – Copyright The Financial Times Limited 2018