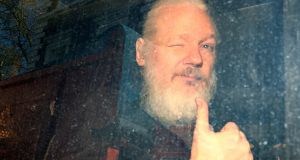 Lenin Moreno said Mr Assange had given them directions on how to propagate information on issues important to both him and his financiers. File Photograph: Hannah McKay/Reuters

Lenin Moreno said Mr Assange had given them directions on how to propagate information on issues important to both him and his financiers.

Mr Moreno added that Swedish programmer Ola Bini, who is in custody in Ecuador, was one of the hackers who visited Mr Assange many times.

Mr Bini lives in Quito and was detained last week just hours after Mr Moreno evicted Mr Assange from the embassy, allowing him to be arrested by British authorities.

In Quito earlier in the day, Mr Bini’s parents called for authorities to release their son while expressing confidence he had done nothing wrong.

His father, Dag Gustafsson, said: “Ola is a friend of Julian Assange, nothing more.”

Meanwhile, demonstrators clashed with police in Ecuador’s capital during a protest against Mr Moreno’s action against Mr Assange, as well as his removal of state workers and the government’s acceptance of a loan from the International Monetary Fund.

Mr Moreno made his allegations at the Inter-American Dialogue during a five-day visit to Washington. He will not have meetings with officials from the Trump administration.

Mr Assange had enjoyed asylum since 2012 at the embassy in London but relations between the Australian and Ecuadorian officials had grown increasingly tense.

Mr Moreno’s government has accused Mr Assange of creating conflict by meddling in international affairs, harassing staff and even smearing faeces on the embassy’s walls.

Mr Assange is in custody in London awaiting sentencing for skipping bail to avoid being sent to Sweden as part of an investigation into a rape allegation.

The US is also seeking his extradition after charging him with conspiring to break into a Pentagon computer system.

Ecuador’s president suggested Mr Assange was able to operate equipment and collaborate with embassy staffers for a long time thanks to the support of Mr Moreno’s predecessor, Rafael Correa, who granted asylum to Assange.

Mr Moreno said: “There are other answers that fit with someone’s else money, which (this person) kept taking away from Ecuador in order to keep power and in order to go back to power,” though he did not refer specifically to Mr Correa at first.

However, at a later point, Mr Moreno said “the president” spends three million dollars a month to propagate his ideas and has been receiving money from the socialist government of Venezuelan president Nicolas Maduro to perform economic studies.

Mr Moreno said his government has not requested cooperation from the United States for the investigation of Mr Assange and Mr Bini. But, he added, “if we need it, we will request. Let’s not forget this is a country with very high technology”.

Ecuadorian interior minister Maria Paula Romo contends Mr Bini travelled at least 12 times to meet with Mr Assange at the London embassy. She said he was also in Venezuela earlier this year around the same time as a close aide to Mr Correa.

Prosecutors have said they intend to charge Bini with hacking-related crimes and have detained him for up to 90 days while they compile evidence.

Mr Bini’s father said his son works as a software developer for a non-profit group and has a “burning passion” for freedom of speech and online personal integrity issues.

He said he is convinced his son is innocent and will remain in Ecuador until he is released.

“For us, it’s surreal to think Ola is involved in these things, these accusations,” Mr Gustafasson said. – PA