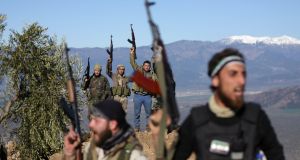 Syrian forces are poised to enter two contested enclaves, Afrin – where Kurdish militiamen are battling the Turkish army and its Syrian surrogates – and Eastern Ghouta, next to Damascus, where jihadis continue to fight the army.

Isolated and besieged by government troops, Eastern Ghouta is of key interest to humanitarian organisations seeking to aid trapped civilians.

The Syrian army has mobilised for a ground offensive against the enclave, adjacent to Damascus’s Old City. Residents on both fronts have braced themselves for the assault.

At least 250 people have been killed by artillery fire and aerial bombardment this month as the Syrian military, supported by Russian air cover, has “softened up” enclave defenders ahead of the operation, while 20 civilians have been killed and dozens wounded in the Old City from retaliatory mortars and rockets.

An estimated 350,000-400,000 people live in Eastern Ghouta, including 1,000 in urgent need of medical treatment. Last week an aid convoy of nine lorries reached the enclave, the first since November, carrying urgently needed supplies for 7,200 people.

Due to soaring food prices, impoverished families have been subsisting on one meal a day since the army tightened its siege last November. UN officials say malnutrition is rife, although Eastern Ghouta was once the capital’s market garden.

Calls for a 30-day countrywide ceasefire for medical evacuations and food deliveries has been ignored by the government, which is using the siege to end armed resistance.

Last year Eastern Ghouta was proclaimed a “de-confliction” or ceasefire zone by Russia, Iran and Turkey, but several armed groups refused to halt hostilities, besieged an army base, infiltrated suicide bombers into central Damascus, blocked the main highway between Damascus and Homs and fired missiles into the capital.

Eastern Ghouta’s towns, villages and countryside fell under control of rebel fighters in 2013 and are now the last Damascus-area redoubt of fundamentalist fighters from Faylaq al-Rahman (Legion of Rahman) and Saudi-sponsored Jaish al-Islam (Army of Islam).

Elements of al-Qaeda offshoot Hay’at Tahrir of Sham (formerly Jabhat al-Nusra) have reportedly negotiated with the government for evacuation to northwestern Idlib province.

Since anti-government and fundamentalist fighters occupying Damascus suburbs have reached such agreements and been transported to Idlib, the government’s objective is to exert military pressure on Eastern Ghouta’s holdouts to follow their example.

Meanwhile, Turkey, the US and the Syrian government, with its allies Russia and Iran, are involved in Afrin, risking clashes and raising hopes of political deals.

Syrian state media reported on Monday that pro-government “popular” forces would deploy in the northwestern Kurdish Afrin enclave “within hours” to support the “steadfastness of [its people] in the face of aggression carried out by the forces of the Turkish regime”.

Turkey is seeking to oust Kurdish fighters from the US-backed Syrian Democratic Forces (SDF), which Ankara regards as an extension of the Turkish Kurdish separatist movement.

Syria’s allies, Russia and Iran, appear to have approved the Afrin move on the dangerous chessboard of northern Syria, in spite of Turkish threats.

If clashes are averted, the arrival in Afrin of pro-regime paramilitaries could promote co-operation between Damascus and the SDF, which has allied with the US against the Islamic State terror group, but not joined the anti-government opposition.

The Kurds have proposed the return of the 25 per cent of Syria’s territory they hold to government rule under a federal system. Redeployment of the Syrian army along the Syrian-Turkish border could ease Ankara’s concerns about an armed Kurdish presence there and exert pressure on the US, also regarded as an aggressor by Damascus, to withdraw its 2,000 troops from SDF-held areas.