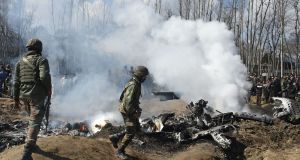 Indian soldiers inspect the remains of an Indian Air Force helicopter after it crashed in Budgam district, outside Srinagar Photograph: Tauseef Mustafa/AFP/Getty

Tensions between nuclear-armed rivals India and Pakistan escalated sharply on Wednesday, following conflicting claims by both of having shot down each other’s fighter aircraft in aerial ‘dogfights’ in the disputed Kashmir region.

A day after Indian Air Force (IAF) fighters attacked an alleged terrorist camp deep inside Pakistan, Islamabad said it had captured one Indian pilot after his aircraft was shot down in the first air-to-air engagement between the two forces since their last major war in 1971.

He told reporters in Islamabad that one of the IAF aircraft crashed in Pakistan-administered Kashmir while the second was hit and “limped” back to its base on the Indian side of the disputed principality.

He also displayed the seized pilot’s identity documents, in addition to publicising video clips of the trussed-up and bloodied pilot on social media outlets, in which he identifies himself and reveals only his service serial number.

India has called on Islamabad to treat the officer humanely and in accordance with the Geneva Convention. In a demarche to a senior Pakistani diplomat from its embassy in Delhi, India’s foreign ministry has demanded the pilot’s swift return.

An Indian foreign ministry official provided a different account of the events that led to the pilot’s capture. Raveesh Kumar claimed that Pakistan had responded to Tuesday’s attack by the IAF on a terrorist camp deep inside its territory by launching a retaliatory strike early the following morning against Indian military installations in Kashmir.

In response to PAF strikes this morning as released by MoFA, IAF crossed LOC. PAF shot down two Indian aircrafts inside Pakistani airspace. One of the aircraft fell inside AJ&K while other fell inside IOK. One Indian pilot arrested by troops on ground while two in the area.

In his brief statement, which was short on detail, Mr Kumar said the IAF had responded “instantly” to the PAF’s aggression and in the “ensuing aerial engagement” had downed one of its adversary’s fighters.

“In this engagement we lost one MiG-21 and the pilot is missing in action,” Kumar said. He declined to elaborate or answer any questions.

Military officials told The Irish Times that four PAF F-16 fighters had attempted to bomb an ammunition dump adjoining the line of control (LoC) that divides Kashmir between the neighbours. In response the IAF had scrambled an equal number of fighters and in the ensuing “engagement”one Indian MiG-21 and a Pakistani F-16 were shot down. Pakistan’s Gen Ghafoor, however, has denied any PAF losses.

The IAF strike on an alleged militant camp in Balakot, 50km from the LoC in Pakistan’s northwestern Pakhtunkhwa province on Tuesday, followed the suicide car bomb attack on February 14th that killed more than 40 Indian troops in Indian-administered Kashmir.

The Pakistan-based Islamist Jaish-e-Mohammad (JeM or Army of Mohammad) group claimed responsibility for that attack. India blamed it on the Pakistan army and its Inter Services Intelligence Directorate and vowed vengeance against Islamabad.

Pakistan’s prime minister Imran Khan called for India to engage in talks. He said “better sense” should prevail so that both sides could de-escalate the tense situation.

“History tells us that wars are caused by miscalculation,” Mr Khan said in a televised address. Given the kinds of weapons both sides possessed, they could not afford any miscalculation, he stated, in reference to the large nuclear arsenals both sides hold.

“We should sit down and talk,” he said. India had not responded to the appeal by Wednesday night.

The Indian and Pakistani armies continued to exchange mortar and small arms fire across the LoC. India has also placed its military on alert along its borders and put its navy in “combat role”, in spite of appeals from China, Britain, the European Union and the US for both sides to exercise restraint.

India is also considering stopping commercial flights in Kashmir and other states bordering Pakistan, such as Punjab and adjoining Himachal Pradesh, to “clear” the skies for the Indian Air Force.

For over more than four hours on Wednesday, the Indian government ordered all airlines to stop operating from eight busy airports in northern India for the next three months but, under public pressure, withdrew the fiat by early evening. Pakistan, however, has banned the over flight of all Indian aircraft, forcing transcontinental passengers to take a longer route to the West.

Pakistan and India have fought four wars since independence from Britain, two of them over Kashmi, which is divided between the neighbours but claimed by both.