Travellers arriving in Spain will not have to quarantine from July 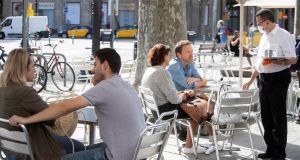 People sit on the terrace of a bar in Barcelona, Spain, the government begins to further ease coronavirus restrictions. Photograph: Marta Perez/EPA

Spain has said it will lift a two-week mandatory confinement for all travellers arriving from overseas starting on July 1st.

The government said in a brief statement that cabinet ministers made the decision to lift the mandatory quarantine during a meeting on Monday.

Prime minister Pedro Sánchez had already announced over the weekend that his nation was ready to welcome some foreign visitors in July.

The government is looking to establish safe corridors between parts of Spain that have the outbreak under control and similar areas in Europe that are an important source of tourists. There has been no talk so far of reopening to travellers from outside the European Union.

The country is making progress on its staggered plan out of lockdown.

Roughly half of the population, including residents in the biggest cities, Madrid and Barcelona, are entering phase one, which allows social gatherings in limited numbers, restaurant and bar service with outdoor seating and some cultural and sports activities.

The other half of the country, provinces with fewer infections or ready to face a possible second outbreak, are going one step further in loosening up restrictions. That includes no time limits on outdoor activities, meetings of up to 15 people, weddings and visits to nursing homes and beaches

Spain is one of the world’s most visited countries, attracting more than 80 million international tourists each year. The industry represents 12 per cent of Spain’s GDP and employs 2.6 million people. Its economic importance is even greater on Spain’s Canary and Balearic archipelagos.

Greece is also making efforts to salvage its tourist season. Regular ferry services to its islands have restarted, and cafes and restaurants are also back open for business. Greece has had a remarkably low infection rate with 171 deaths from the virus while Spain has endured nearly 29,000 deaths.

The Chinese city of Wuhan has conducted more than 6.5 million coronavirus tests over a 10-day period in a bid to test all its 11 million residents, state media said.

The city’s health commission, in a post on its website, asked anyone who has not been tested to come forward by the end of Tuesday.

No new Covid-19 cases have been reported since the 10-day campaign started, though some people with no symptoms tested positive. More than three million people had been tested prior to the campaign, the official Xinhua News Agency said.

The campaign was launched after a cluster of six cases was discovered in one residential compound. Wuhan, where the global pandemic is believed to have started late last year, was by far the city hit hardest in China.

The Palestinian prime minister said the West Bank would reopen on Tuesday after a dramatic slowdown in the spread of coronavirus.

The Palestinian Authority, which administers autonomous areas of the Israeli-occupied West Bank, imposed a strict lockdown in March.

The Palestinians reported 368 cases of Covid-19 in the West Bank, with two deaths.

A coal mine in northeastern Czech Republic near the border with Poland has halted work after a major Covid-19 outbreak among the miners.

In recent days, tests of some 2,400 people revealed a total of 212 positive for coronavirus, mostly miners from the Darkov mine in the town of Karvina and their family members. It is currently the biggest local outbreak in the country.

Ivo Vondrak, the head of the regional government, said that only workers who are necessary to deal with ventilation and water pumping remain in the mine.

Local health authorities have limited public gatherings in Karvina county to 100, while it is 300 in the rest of the country. Visits to care homes and hospitals are banned.

The daily increase of confirmed Covid-19 cases in the entire Czech Republic was 65 on Sunday. A total of 8,957 people have tested positive in the country, while 315 have died.

Bars, restaurants and cafes are returning to full service as the government takes further steps to ease restrictions.

Establishments can serve customers in interior spaces, and hotels are also reopening together with public swimming pools, wellness centres and saunas.

Sports, cultural and other public events for up to 300 people will be allowed, up from the previous 100.

Restrictions have been only partially lifted for schools. Students up to fifth grade can attend on a voluntary basis under strict conditions starting o Monday. There must be no more than 15 students in a class and they must stay together the whole day.

Remaining primary school pupils and all high school students will not return until the start of the new school year on September 1st.

A coronavirus outbreak linked to a slaughterhouse in the Netherlands has spread across the border to Germany.

Dutch regional health authorities said tests showed 147 of the 657 employees at a meat processing plant in Groenlo were positive for Covid-19.

They said 79 of those infected live in Germany, while 68 are resident in the Netherlands.

There have been several clusters of Covid-19 among slaughterhouse workers in Germany in recent weeks, prompting a government pledge to crack down on conditions in the industry.

Many workers in German abattoirs are migrants from eastern Europe employed by subcontractors. They often live in shared housing and are transported to and from the slaughterhouses by shuttle bus, increasing the likelihood of infection.

Domestic airline travel has partially resumed as authorities continued to ease a nationwide lockdown despite the caseload rising at more than 6,000 new infections per day.

Ticket machines have been shifted outside, where airport workers sanitised baggage and stalls stocked masks, sanitiser and face shields.

Commercial flights returned across India, except for the states of Andhra Pradesh and West Bengal.

People will be required to wear masks when using public transport and taxis across South Korea, starting on Tuesday, as health authorities look for more ways to slow the spread of coronavirus as people increase their public activities.

The health ministry said masks will also be required on all domestic and international flights from Wednesday.

From June, owners of “high-risk” facilities such as bars, clubs, gyms, karaoke rooms and concert halls will be required to use smartphone QR codes to register customers so they can be tracked down more easily when infections occur.

South Korea was reporting 500 new cases per day in early March before it largely stabilised its outbreak with aggressive tracking and testing, but infections have been rising slightly again since early May, with more people going out during warmer weather and eased social distancing guidelines.

The country plans to further loosen restrictions by increasing the maximum size of gatherings from 10 people to 100.

Prime minister Jacinda Ardern said the change would take effect from midday on Friday, in part, to allow religious services that day and over the weekend.

New Zealand has reported just one new case of coronavirus over the past week, attributed to a strict early lockdown and ongoing vigilance. – AP