Public warned they should only be travelling for essential hardware 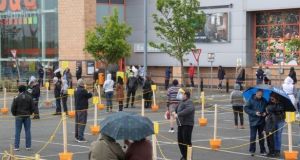 People queuing outside shops in Dublin after the easing of restrictions allowed people to travel to purchase essential hardware. File photograph: Collins

The Government has urged the public not to make appointments with shops to buy non-essential items amid reports of businesses allowing customers to browse furniture and homeware items.

At the Government’s morning Covid-19 media briefing, assistant secretary general at the Department of Taoiseach Liz Canavan said she was aware of queries around whether selling by appointment is allowed for product categories not included in the list of essential retailers under phase one of the roadmap.

“At the moment the overriding aim is for people to stay at home except for essential purposes. Appointments to shop for homeware, furniture or other non-essential items are not part of phase one. The focus should remain on online ordering or delivery.

“The idea that people are making appointments to go into these places, (that) is not intended for phase one. If people are trying to find loopholes, they are missing the spirit of this. We are asking businesses to take the responsible approach. It is only for essential hardware that you should be traveling,” she said.

Ms Canavan also said she could not see “at this stage” a scenario whereby the second phase of the easing of restrictions, due on June 8th, is brought forward given the low number of new cases.

“The approach that is taken, and it is set out in the roadmap, is the three weeks and the reason for the three weeks is that it allows us to assess over the period of incubation. There is a 14-day incubation period for the disease. I think in phase one we are pretty much going to want to see what the impact is. I think we can all see that there is a lot of more movement, a lot more people around, more traffic. “So it is important to see how the disease is reacting to that before we would move forward. We would like to assess that until the full period is more or less complete.”

The Government is currently considering accelerating the easing of restrictions during later phases.

After the next phase in the planned easing of the lockdown on June 8th, there is a further phase on June 29th, and another on July 20th.

If the numbers of cases and deaths continues to fall in the coming weeks, some aspects of the July 20th opening could be brought forward to June 29th.

Ms Canavan also said that any potential changes to social distancing guidelines must be “slow” and “incremental”. It comes as some Ministers raised the possibility of reducing the two-metre social distancing rule to one metre.

“There is a lot of discussion and speculation about whether some of the public health advice and the roadmap schedule for reopening will change.

“Firstly on social distancing, the current advice from Nphet and the ECDC is that a distance of two meters should be observed between individuals.

“That remains the public health advice from the Government. Similar advice is in the place in very many countries around the world.”

“Any changes to the current restrictive social distancing measures must be slow and incremental. This approach is essential as going too far too fast could result in a sudden surge in infections. The Government continues to make regular assessments of the existing restrictions. It also looks at the economic and social implications of the continued restrictions. However they will remain in place for as long as they are needed to save lives.”

Almost 56,300 employers are now registered with Revenue for the temporary wage subsidy scheme.