Iranian petrol tanker arrives in Venezuela in defiance of US 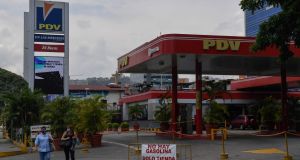 A petrol station in Caracas with a sign reading “No gasoline. Only store” on May 14th. Photograph: Federico Parra/AFP via Getty Images

The first of five ships laden with Iranian petrol crossed in to Venezuelan waters on Sunday in defiance of US sanctions, after Tehran and Caracas warned Washington over any attempt to intercept them.

The ships set off from the Middle East in March and April. Iranian-flagged Fortune, the first to reach Venezuelan territorial waters, headed towards refineries in the west, escorted by ships from the Venezuelan navy.

Venezuela is desperately short of petrol despite sitting on the world’s biggest oil reserves. Its refineries have largely collapsed after years of mismanagement and it is struggling to import petrol due to US sanctions designed to push socialist president Nicolás Maduro from power.

Iran is labouring under similar sanctions but has a surplus of petrol due to the global economic crash caused by coronavirus.

The ships come to the Caribbean at a time when the US military has a large presence there. Last month, President Donald Trump sent warships to the area to stop “cartels, criminals, terrorists and other malign actors” exploiting the coronavirus pandemic to smuggle drugs to the US. The force includes destroyers and surveillance aircraft.

Venezuela’s defence minister Vladimir Padrino López said this week the armed forces would escort the tankers “to welcome them and to say to the people of Iran, thank you, thank you, for your solidarity”.

Iran’s president Hassan Rouhani warned the US on Saturday that his country would respond to any “problems” faced by its ships.

“If Americans create problems for our oil tankers in the Caribbean waters or anywhere in the world, we will reciprocally create problems for them,” he said. “We always consider it our legitimate right to defend our territorial integrity and national interests and hope Americans do not make a mistake.”

At a meeting of the UN Security Council on Thursday, Venezuela’s ambassador to the UN, Samuel Moncada, said Caracas would view any attempt to block the ships as an “act of war”. Iran has also complained to the UN about what it says are US threats to the convoy.

The Americans have played down that idea. The Pentagon said on Thursday it knew of no such plan.

Even so, the convoy is an irritant to the Trump administration. “You have to ask yourself what interest Iran has in Venezuela,” said Admiral Craig Faller, head of US Southern Command, speaking at an event hosted by the Florida International University this week. “It is to gain a positional advantage in our neighbourhood as a way to counter US interests.”

Washington and the Venezuelan opposition suspect the Maduro regime is using gold from central bank reserves to pay Iran rather than cash.

On Friday, department of state spokesman Morgan Ortagus accused Venezuela of having “looted” nine tons of gold bars and sent them to Tehran in exchange for the petrol.

Ben Cahill, a fellow at the Center for Strategic and International Studies in Washington, said that while the US had been relatively successful in choking off the Maduro government’s revenue sources, an alleged “gold for products” transaction that bypassed the banking system was difficult to stop.

US sanctions on Iran can lead to anyone buying or facilitating the sale of petroleum products from the country being subject to penalties. Venezuela is also subject to US sanctions, including on its state-owned oil company.

“It’s almost become like a whack-a-mole situation where every time an illicit transaction comes up involving Venezuela, the US government tries to put sanctions on it,” said Mr Cahill. “But there are diminishing returns, we’re running out of entities to sanction.”

The Venezuelan opposition has questioned the opaque nature of the deal and suggested the tankers – the Fortune, Forest, Petunia, Faxon and Clavel – might be carrying something other than petrol.

“Who can guarantee there’s oil in those boats?” asked Juan Guaidó, the head of the opposition, who is recognised as Venezuela’s legitimate interim president by about 60 countries covering the US, the EU and most of Latin America.

In a webinar with the Inter-American Dialogue, a Washington think tank, Mr Guaidó said the Maduro regime was paying Iran with “blood gold” from illegal mines in Venezuela’s southern jungle.

Oil analysts say the five medium-sized tankers probably contain about 1.25m-1.5m barrels of petrol. Mr Guaidó said in normal circumstances that would be enough to meet Venezuela’s needs for just two days, but during the coronavirus lockdown and given the country’s economic plight, it might last 10-20 days.

Meanwhile, the Maduro government is trying to repair its own refineries so it can use its domestic heavy crude oil to make petrol. Iran is helping, and has flown engineers on direct flights from Tehran to a major refinery complex on the Venezuelan coast.

The flights were operated by Mahan airlines, an Iranian carrier sanctioned by the US for allegedly transporting weapons to Middle Eastern terror groups. Mr Guaidó said the opposition and its US allies had tracked 17 such flights in recent weeks.

The imminent arrival of the ships has revived memories of last year’s incident in the Mediterranean when British marines seized an Iranian tanker in Gibraltar, saying it was carrying oil to Syria in violation of an EU embargo. The Iranians retaliated by impounding a British-flagged ship in the Strait of Hormuz at the entrance to the Gulf.

The stand-off lasted two months until both ships were released. – Copyright The Financial Times Limited 2020