Two-thirds of 514 coronavirus deaths among those aged over 80, department figures show 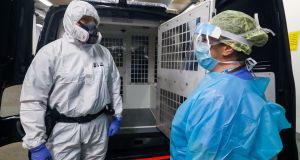 A member of the PSNI Covid-19 unit speaks to a nurse at Musgrave Street custody suite in Belfast. Photograph: Niall Carson/PA Wire

Eight more people have died with coronavirus in Northern Ireland bringing the total number of fatalities to 514, according to the latest figures from the North’s Department of Health.

The department also reported on Monday afternoon that 39 more people had tested positive for Covid-19, taking the number of confirmed cases in the North to 4,609.

So far 46,842 people have been tested for the virus in Northern Ireland.

The Belfast City Council area had the highest number of deaths at 158 while the 10 in the Fermanagh and Omagh District Council area was the lowest number.

Belfast councillors back investigation into Storey funeral 18:21
Coronavirus: One death, 25 new cases reported in State 18:26
Children who go abroad must self-isolate for 14 days before return to school in September 18:10
Angry Taoiseach calls for resumption of work on new National Children’s Hospital 17:56
Man tried to steal cars while high on crack and holding chihuahua 17:51