‘They are murderers’: Special forces unit strikes fear in Venezuela 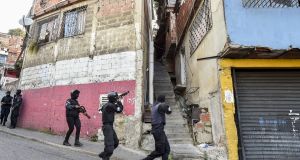 A flickering candle and 19 rose petals – one for every year he lived – adorn a shrine in what used to be the home of Alixon Pisani.

“We love you,” reads a note beside a black and white photograph of the recently killed teenager.

It was 10pm on the night of January 22nd when friends arrived outside with the news that Pisani was dead; gunned down as he demonstrated against Nicolás Maduro’s teetering regime in Catia, a traditionally working-class area of western Caracas.

“He was still just a boy,” said the woman who raised him, his aunt, Nivea Pisani.

“They are murderers . . . demons,” she said of her nephew’s killers. “He just went out to protest because we are going hungry. How many more will die if we carry on like this?”

Pisani, an unemployed 45-year-old, is still waiting for an official explanation about who shot her nephew and why. His death certificate states he died from a firearm injury but offers no hint of the weapon used – or the motive.

But she believes his killers were from Faes, a shadowy and fearsome special forces unit activists suspect Maduro has tasked with pacifying the city’s impoverished red-brick barrios in a bid to snuff out protest in areas once considered the cradle of Chavismo.

“The poor areas are where most people live – and since we don’t support them any more I guess they want to kill us all,” said Pisani, who says witnesses told her Faes agents arrived at the protest shortly before her nephew was shot in the arm and chest.

In his first post-election speech, the comandante promised he would not rest while there were still children in the streets and families going hungry. “Today a new battle starts for the salvation of Venezuela, ” Chávez said.

In the early years of Chavismo, its leader won global accolades and a cult following for his crusade to help Venezuela’s poor. Social projects known as misiones brought healthcare and education to millions of disenfranchised citizens.

But two decades after Chávez’s rise to power, Venezuela is on its knees, and many who were once loyalists have lost faith in his successor. And, increasingly, they are taking to the streets to demand change.

“We’ve never had protests here in Catia – this is new,” said Pisani, attributing the shift to the country’s economic and social collapse under Chávez’s heir.

“Before, I’d open my fridge and see ham, cheese, eggs, meat, chicken. These days there’s nothing but water – and sometimes we don’t even have that. It’s insanity – we never thought we’d be living like this,” she said.

The day he died, Alixon Pisani – who worked in a local bakery – had gone out to protest against the “beggary” into which their oil-rich nation has been plunged. “It’s as if there is no government in this country,” Pisani complained. “How can you not go out to protest?”

Across town, in a sprawling eastern neighbourhood called José Félix Ribas, Venezuela’s special forces have also made their deadly presence felt in an apparent bid to crush dissent.

“It’s the first time they’ve attacked with so much force,” said one local woman, too scared to be named, as she and other residents described a series of war-like operations in the days after opposition leader Juan Guaidó sparked the current political crisis by declaring himself Venezuela’s rightful president on January 23rd.

A second woman recalled balaclava-wearing, rifle-toting troops swarming into the labyrinthine community like an army of “little black ants”, kicking down doors and shooting.

“Even the Chavistas around here don’t agree with Nicolás Maduro,” said her 18-year-old son, who described narrowly escaping death during one operation, sprinting over rooftops and down alleys as the agents opened fire.

The teenager, who now sleeps in another part of Caracas for fear of being killed, agreed the repression was designed to dissuade the urban poor from leaving their hilltop homes to join the revolt. “If the barrio goes down it will be like a nuclear bomb.”

Things were not always thus, a group of locals explained as they sat around a wooden table in a kitchen equipped with nothing but a broken stove and an almost bare pantry.

“Chávez would go into the barrios, into any house, and whichever house Chávez went into they’d say: ‘Have a little cup of coffee, my presidente,’” said the 18-year-old. “They adored him him. They loved him.”

And what if Maduro came calling today?

“We’d keep him here for a week eating what we have to eat – lentils and beans – to see if he liked it,” his mother chuckled sarcastically.

“Without any salt,” chipped in a third woman.

Faes – the special action force – has earned notoriety since the uprising against Maduro began last month. Graffiti artists have daubed Caracas’s walls with messages denouncing its operatives as “murderers of the people”.

But little is known about the elite group’s inner workings or even who exactly commands it. In a recent report, the Venezuelan human rights group Provea said Faes was created by Maduro in 2017 to fight “organised crime and terrorism” and was part of Venezuela’s national police force, although some stories in state-run media outlets describe it as being under the command of the Venezuelan military. By last year it had almost 1,300 agents.

But activists say it has taken on an explicitly political role since the the most severe challenge to Maduro’s rule erupted last month.

In one Instagram video, a Faes commander urges troops to show “absolute loyalty to Maduro” given the “extremely difficult moments” his administration was facing. “As soldiers who are faithful to the revolution, let’s go for it, let’s really go for it – without hesitation,” he says.

Provea’s co-ordinator, Rafael Uzcátegui, said: “What the government is trying to do is contain the discontent, to contain the anger – not by addressing the citizens’ concerns but by instilling terror and fear.”

Uzcátegui said his group had counted 43 killings linked to the protests. It had not been possible to identify the perpetrators of each death but he believed Faes was the number one culprit, followed by the pro-government paramilitary groups known as colectivos. Faes’s role appeared to be “neutralising the greatest possible number of people”, not bringing criminals to justice.

Asked about alleged killings by the group on Venezuelan television last week, the attorney general, Tarek William Saab, said the criminal responsibility for such acts was “individual. Those who commit violations . . . will be prosecuted, whichever part of the police they are from.”

On Monday, as she prepared for the last of nine evenings of mourning, Pisani said she felt uneasy about the prospect of foreign military intervention to unseat Maduro, but was adamant he had to step down.

“I want him to go. He must realise this country is a disaster,” she said.

Most of all, though, she wanted answers about the masked gunmen who had condemned her nephew to an unmarked concrete grave.

Why did they kill him? What for?” she asked. “His life had hardly even begun.” – Guardian